Giants in the Earth: A Saga of the Prairie (Paperback) 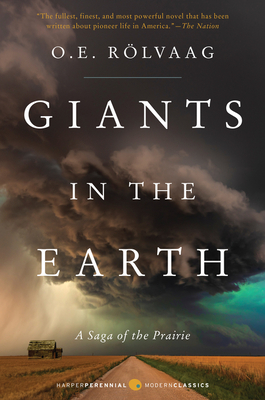 "The fullest, finest, and most powerful novel that has been written about pioneer life in America." — The Nation

Giants in the Earth follows a Norwegian pioneer family's struggles with the land and the elements of the Dakota Territory as they try to make a new life in America. The book is based partly on Rølvaag's personal experiences as a settler, and on the experiences of his wife’s family who had been immigrant homesteaders. The novel depicts snow storms, locusts, poverty, hunger, loneliness, homesickness, the difficulty of fitting into a new culture, and the estrangement of immigrant children who grow up in a new land.

Giants in the Earth was turned into an opera by Douglas Moore and Arnold Sundgaard; it won the Pulitzer Prize for Music in 1951.

“A moving narrative of pioneer hardship and heroism...The background of the boundless Dakota prairie, with its mysterious distances and its capacity for evil, is painted with alternating beauty and grimness.” — The Atlantic

“A firmly woven tapestry of harsh texture wrought by a master sure in his choice of strong fiber and of color, telling with heroic gesture and intricate design its legend of simple people struggling in the eternal coil of unwitting life.” — Times Literary Supplement (London)

“That in Giants in the Earth this Norwegian American immigrant has made a distinct contribution to the literature of two countries there is no doubt. . . . It has a bare simplicity which is cumulative in effectiveness.” — New York Times

“The fullest, finest, and most powerful novel that has been written about pioneer life in America.” — The Nation