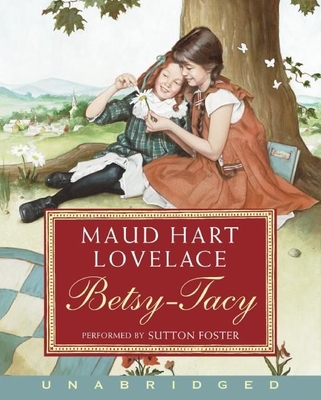 This is book number 1 in the Betsy-Tacy series.

Betsy hopes that whoever moves into the house across the street will have a little girl just her age. And the little girl who moves in is just her age. Her name is Tacy. She is very bashful, but she likes to listen to Betsy's stories—wonderful stories that the girls love, and that they keep as their own special secret.

After a while, it's hard to remember a time when Betsy and Tacy weren't best friends.

Maud Hart Lovelace (1892-1980) based her Betsy-Tacy series on her own childhood. Her series still boasts legions of fans, many of whom are members of the Betsy-Tacy Society, a national organization based in Mankato, Minnesota.

Sutton Foster is much-loved by Broadway audiences, having starred in The Drowsy Chaperone, Little Women, (both performances Tony® nominated), and Thoroughly Modern Millie, for which she was awarded the Tony®. She has appeared on HBO's Flight of the Conchords, and Disney Channel's Johnny and the Sprites as Tina.