The Incorrigible Children of Ashton Place: Book I: The Mysterious Howling (Paperback) 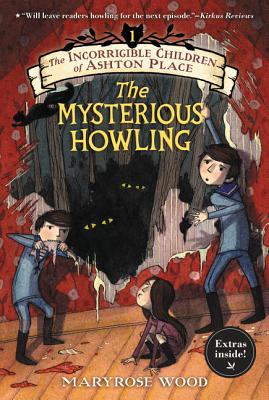 This is book number 1 in the Incorrigible Children of Ashton Place series.

The first book in the Incorrigible Children of Ashton Place—the acclaimed and hilarious Victorian mystery series by Maryrose Wood, perfect for fans of Lemony Snicket and Trenton Lee Stewart—has a brand-new look.

Discovered in the forest of Ashton Place, the Incorrigibles are no ordinary children. Luckily, Miss Penelope Lumley is no ordinary governess. A recent graduate of the Swanburne Academy for Poor Bright Females, Penelope embraces the challenge of her new position. Though she is eager to instruct the children in Latin verbs and the proper use of globes, first she must eliminate their canine tendencies.

But mysteries abound at Ashton Place: Who are these three wild creatures? Why does Old Timothy, the coachman, lurk around every corner? Will Penelope be able to civilize the Incorrigibles in time for Lady Constance's holiday ball? And what on earth is a schottische?

Maryrose Wood is the author of the first five books (so far!) in this series about the Incorrigible children and their governess. These books may be considered works of fiction, which is to say, the true bits and the untrue bits are so thoroughly mixed together that no one should be able to tell the difference. This process of fabrication is fully permitted under the terms of the author's Poetic License, which is one of her most prized possessions.

Maryrose's other qualifications for writing these tales include a scandalous stint as a professional thespian, many years as a private governess to two curious and occasionally rambunctious pupils, and whatever literary insights she may have gleaned from living in close proximity to a clever but disobedient dog.

Jon Klassen grew up in Niagara Falls, Canada, and now lives in Los Angeles, California. He is the New York Times bestselling author and illustrator of several books, including I Want My Hat Back and This Is Not My Hat, for which he won the Caldecott Medal. Two of his picture books have been named Caldecott Honor books: Sam and Dave Dig a Hole and Extra Yarn (winner of the Boston Globe–Horn Book Award), both by Mac Barnett. You can visit him online at www.burstofbeaden.com.

It’s the best beginning since The Bad Beginning (1999) [by Lemony Snicket] and will leave readers howling for the next episode. — Kirkus Reviews (starred review)

“How hearty and delicious...Smartly written with a middle-grade audience in mind, this is both fun and funny and sprinkled with dollops of wisdom (thank you, Agatha Swanburne). How will it all turn out? Appetites whetted.” — Booklist (starred review)

With a Snicketesque affect, Wood’s narrative propels the drama…pervasive humor and unanswered questions should have readers begging for more. — Publishers Weekly (starred review)

Every newspaper and website in America is going to tell you that The Mysterious Howling will leave you HOWLING FOR MORE! So I’m not going to say that. But it’s really good. — Adam Rex, author of The True Meaning of Smekday