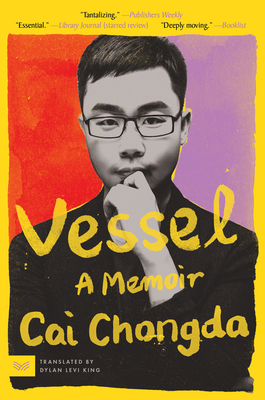 “Essential reading for anyone interested in contemporary life in China, and highly recommended for memoir enthusiasts in general.” -- Library Journal (starred review)

"Chongda paints a tantalizing portrait of a changing China in his dazzling English-language debut. [Vessel] shines with the bright talent of an excellent storyteller." -- Publishers Weekly

An unprecedented and heartfelt memoir that illuminates the lives of rural Chinese workers, offering a portrait of generational strife, family, love, and loss that crosses cultures and time.

Cai Chongda spent his childhood in a rural fishing village in Fujian province. When his father—a former communist gang leader turned gas station owner—has a stroke that partially paralyzes him, his responsibilities fall to Cai, his only son.

Assuming his new role as head of the family, Cai toils alongside his mother and older sister to pay the medical bills that have become a part of a rapidly changing Chinese society. As Cai works his way through university and moves to Beijing, eventually becoming the editorial director of GQ China, he finds his life increasingly at odds with the family he supports but has left behind.

Like The Glass Castle and Hillbilly Elegy, Vessel neither romanticizes nor condemns the people and circumstances that shaped a young man’s life, but instead offers a way forward, revealing how tradition can enrich modern life.

Translated from the Chinese by Dylan Levi King

Writer, media personality, and entrepreneur, Cai Chongda was born in 1982. He grew up in the small coastal town of Minnan in the Fujian province of China. At 24, Cai became the News Editor of influential Chinese magazine, Modern Weekly. His provocative writing continues to make him a controversial figure in China.  \Three years later, he was hired by GQ China as Director of Reporting, becoming the youngest person to hold this position in GQ's seventeen international branches. In 2015, Cai branched into the fashion world, founding the menswear brand Magmode.

"Chongda paints a tantalizing portrait of a changing China in his dazzling English-language debut. [Vessel] shines with the bright talent of an excellent storyteller."
— Publishers Weekly

"Deeply moving...Cai’s deep respect and love for the people who are important to him shine through in his beautiful and poignant profiles."

“Vessel is an exploration of the self and the other, and of the past and the present. It opens up in this new field of nonfiction, a new frontier that is thoughtful and well-written but also wholly unique.”
— Yan Lianke, author of Three Brothers: Memoirs of My Family and The Explosion Chronicles

The people that inspire you are like beacons in the fog...For me, Cai and his book have become another beacon.”
— Golden Horse Award-winning actor Andy Lau

“Essential reading for anyone interested in contemporary life in China, and highly recommended for memoir enthusiasts in general.”
— Library Journal (starred review)

"Vessel is a unique look into the background of a thirty-something in contemporary China."
— Asian Review of Books
Back to top