Cook It, Spill It, Throw It: The Not-So-Real Housewives Parody Cookbook (Hardcover) 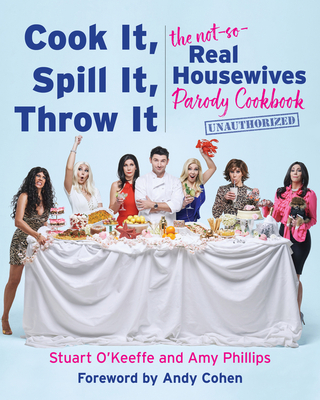 Celebrity chef Stuart O'Keeffe and comedian Amy Phillips razz the Real Housewives in this gorgeous cookbook filled with recipes inspired by iconic moments in the franchise’s rich history. With a foreword by Andy Cohen.

“Cook It, Spill It, Throw It is an immersive, one-of-a-kind experience in a world we can’t escape (but let’s face it, we don’t want to!).” —from the foreword by Andy Cohen

Trends come and go, but watching rich women drink and catfight is forever. Which is why after more than a decade of airing, the Real Housewives phenomenon continues to reign supreme in the pop culture stratosphere. Week after week, season after season, loyal fans watch the thrilling drama—the backstabbing, the gossiping, the screaming, the table flipping, the wine tossing—unfold.

Cook It, Spill It, Throw It is a cookbook created specifically for Housewives fans. Chef Stuart O’Keeffe and comedian Amy Phillips—long-time devotees themselves—have dreamed up an inviting menu served with a side of delicious snark.

Inspired by the series and its stars, the dishes and drinks evoke familiar moments of chaos from the franchise. Whether you’re looking to make Ponytail Pulled Pork, or you want to comfort a friend in the Caicos with Eggs a Lu’Francais, there’s a meal for you—and there are definitely plenty of drinks (including Henny-thing Can Happen and the classic Singer Stinger Sipper).

Featuring gorgeous original photography and equally gorgeous recipes, Cook It, Spill It, Throw It is the must-have cookbook and companion for every Housewives addict.

Stuart O’Keeffe is an Irish-born, California-based chef and best-selling author. He appears frequently on TV, starring in Food Network shows such as Private Chefs of Beverly Hills and Let’s Eat, and he has appeared as a judge on Chopped, in addition to numerous appearances on Today and Rachael Ray where he offers fun, simple recipes to get home cooks into the kitchen. His first cookbook, The Quick Six Fix, was released in 2016 by HarperCollins. Stuart received his degree in Culinary Arts from the Dublin Institute of Technology and trained in Bordeaux and the Napa Valley before moving to Los Angeles where he watches the Housewives with his two Westies, Jack and Bo. Keep up to date with Stuart at tastybites.net, @ChefStuart_ on Twitter and @chefstuartokeeffe on Instagram, and Chef Stuart O’Keeffe on Facebook and YouTube.

Amy Phillips is a comedian and radio personality from Grosse Pointe, Michigan, who’s currently living her best life in Los Angeles. Amy honed her skills at Wayne State University and at the American Academy of Dramatic Arts in New York City before studying improv at Second City Detroit, iO Theater in Chicago, and The Annoyance Theater. She combines her love for reality TV and parody with her celebrated Real Housewives (and other celeb) imitations, which are a regular feature on Bravo TV’s Watch What Happens Live with Andy Cohen. Amy currently recaps all things Bravo TV and beyond on her Sirius XM radio show on Radio Andy, Reality Checked. Keep up to date with Amy at meetamyphillips.com, @meetamyphillips on Instagram, and @AmyPhillips_ on Twitter.

“Cook It, Spill It, Throw It is an immersive, one-of-a-kind experience in a world we can’t escape (but let’s face it, we don’t want to!).”

“Cheers and pop the champs for this amazingly hilarious book of delicious recipes and memories of the best Housewife moments ever!”

“Everybody knows the Marge doesn’t miss a meal, and I devoured this book. Amy Phillips and Stuart O’Keeffe concocted the perfect mixture of comedy and cuisine. Cook It, Spill It, Throw It will leave you laughing with your mouth full!”

“In the ATL we love a good meal and lots of spicy drama. I have a modeling school named after me, a wine cellar, a lake house, and now a drink, thanks to Cook It, Spill It, Throw It. And, since I am the queen of serving lewks and my Bailey-Que serves the ladies the most delicious food—with a side of shade of course (lol)—I can’t wait to have my girls over to try it!”

“We are always dining on The Real Housewives of Beverly Hills. Sometimes when there is fighting going on, I am thinking, ‘Can we just end this so I can eat please?!’ I am a very good cook and really enjoy it, so I will love making these recipes.”

“There’s no place like New York City when it comes to great food and cabaret. Cheers to Amy and Stuart on this cool and not, like, all uncool book. And for keeping Eggs à la Française forever relevant!”

— Ben Mandelker and Ronnie Karam, from the Watch What Crappens podcast