Cut!: How Lotte Reiniger and a Pair of Scissors Revolutionized Animation (Hardcover) 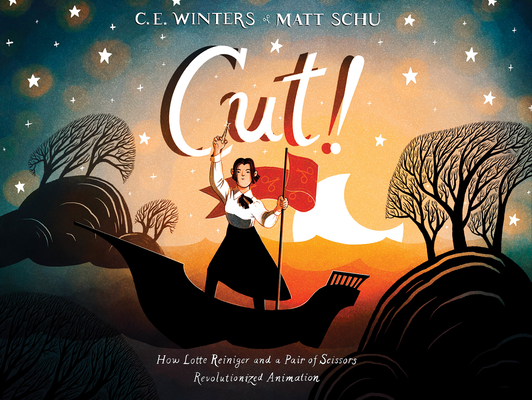 Long before Walt Disney, a young woman revolutionized the landscape of animation using light, a pair of scissors, and her imagination. From acclaimed author C. E. Winters and debut illustrator Matt Schu, STEM meets the arts in this engaging nonfiction picture book biography about Lotte Reiniger. Cut! is an exceptional choice for classrooms and for fans of Hidden Figures, I Dissent, and the Questioneers books.

In the 1920s, when young women had limited opportunities, Lotte Reiniger used her curiosity and ingenuity to change the landscape of animation forever. Inspired by the films of her youth, and encouraged by teachers and mentors working in film at the time, Lotte Reiniger honed her skills in cutting out paper silhouettes to use in stop-motion animation.

Eventually, her talent and her drive led her to invent the multiplane camera, which allowed her to give her animation depth of field. With her small team, Lotte designed and directed the oldest full-length animated film in existence.

Features extensive backmatter, including a timeline of Lotte Reiniger’s life, an author’s note, and sources.

“With a refrain of ‘snip, snip, snip!’ the story introduces readers to German film pioneer Lotte Reiniger (1899–1981). Lotte’s adolescence coincided with the dawn of cinema, a time when movies ‘were silent but filled with magical sights’ . . . Schu’s exquisite digital illustrations possess a strong sense of illumination and depth, often suggesting a tactile quality, as if constructed from paper.” — Horn Book (starred review)

“In the early 1900s, Lotte Reiniger used a traditional German art of scissorcut paper for creating silhouette puppet-play characters with movable joints. She was spellbound by movies . . . determined to develop a way of recreating her puppet plays as films. . . . This picture book offers insights into her achievements as well as the early history of animated films. Schu’s handsome digital artwork makes good use of silhouettes as well as dramatic lighting effects to illustrate Reiniger’s career while drawing children into her story.” — Booklist

“The creator of the world’s oldest surviving full-length animated film is celebrated. . . . Winters keeps the storytelling crisp and to the point. . . . Schu’s art, meanwhile, brings the magic of Reiniger’s cut paper technique to life on these pages, integrating the silhouettes with her trials and triumphs.” — Kirkus Reviews