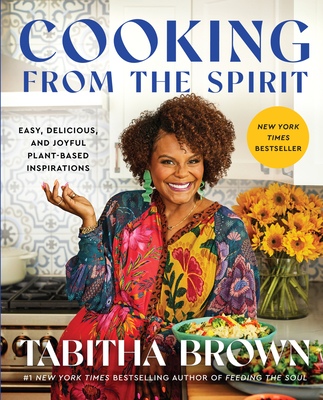 Tabitha Brown, the #1 New York Times bestselling author of Feeding the Soul, presents her first cookbook—full of easy, family-friendly vegan recipes and stories from the spirit, inspired by her health journey and love of delicious food.

Sometimes people say to Tabitha Brown, “I’ve never eaten vegan before.” As Tab says, “Have you ever eaten an apple?”

After living with a terrible undiagnosed illness for more than a year and a half, Tab was willing to try anything to stop the pain. Inspired by the documentary What the Health, she tried a thirty-day vegan challenge—and never looked back. Wanting to inspire others to make changes that might improve their own lives, she started sharing her favorite plant-based recipes in her signature warm voice with thousands, and now millions, of online fans.

Tab’s recipes are flexible, creative, and filled with encouragement, so you trust yourself to cook food the way it makes you happy. If you’re already a “cooking from the spirit” sort of person, you’ll love how much freedom Tab gives to make these delicious vegan dishes your own. If you’re newer to cooking—or to vegan cooking—Tab will help you get comfortable in the kitchen and, most important, have fun doing it!

Cooking from the Spirit is for anyone interested in plant-based eating and all lovers of food, plus anyone who wants a little warm inspiration in their lives. As Tab says, “Honey, now let’s go on and get to cooking from the spirit. Yes? Very good!”

Tabitha Brown is an actress and vegan food star who is affectionately known as “America’s mom.” She has provided millions with food for the body and soul through her videos capturing delicious home-cooked vegan recipes and everyday wisdom rooted in love, kindness, and compassion. Her first book, Feeding the Soul (Because It’s My Business), was a number one New York Times bestseller and won a 2022 NAACP Image Award; she also received the 2021 NAACP Image Award for Outstanding Social Media Personality. Tabitha can be seen as the host on Food Network’s It’s CompliPlated; on her YouTube children’s series, Tab Time; on her show All Love on the Ellen Digital Network; and on season four of Showtime’s The Chi. A successful businesswoman, she has a line of products with Target; a haircare line, Donna’s Recipe; a partnership with Orro plant-based drinks; and a spice blend with McCormick. Born and raised in Eden, North Carolina, she now lives in Los Angeles with her family and dog.

“Brown sandwiches pep talks and vegan recipes between anecdotes of a spiritual and at times supernatural ilk. . . . She treats every life experience as an opportunity to share a lesson learned . . . always bolstered by the same authentic, sincere joy that has made her a hit on TikTok.” — Time on Feeding the Soul

“Brown . . . makes people feel good, makes them think, makes them laugh, and calms them down. Feeding the Soul delivers on its title. It’s a great read for when you need a soul pick-me-up, a life pep talk, or simply something to reflect on.” — Shondaland

“[Tabitha Brown is] a master at feeding viewers’ souls with her inspirational messages of hope and positive affirmations of self-love.” — People.com

“This [book is] sprinkled with Brown’s infectious energy as she shares some of the wisdom that she picked up along her journey, and of course, a few vegan recipes!”  — IndieWire on Feeding the Soul

“If you’ve ever found yourself drawn to shifting to a vegan diet—whether for health or ethical reasons—then you probably know of the shining light that is Tabitha Brown. Her stunning [book] details what it was like to go from an aspiring actress to a woman who decided to do what was best for her body and soul. Full of personal stories and some of Brown’s beloved catchphrases, readers are sure to walk away from this read feeling seen, loved, and heard. And if not, well then that’s your business *wink*.” — Sheknows.com on Feeding the Soul

“When Brown—dubbed ‘America’s Mom’—isn’t posting adorable videos that show her dancing with excitement over vegan garlic-parm croutons, she’s being cast in some of Hollywood’s biggest series (such as Showtime’s The Chi) and being invited onto top talk shows (from Ellen to The Drew Barrymore Show). And though Tinseltown can’t seem to get enough of this Southern belle, it’s Brown’s groundedness and unrelenting commitment to being her authentic self that points to why she is so damn beloved.” — VegNews on Feeding the Soul