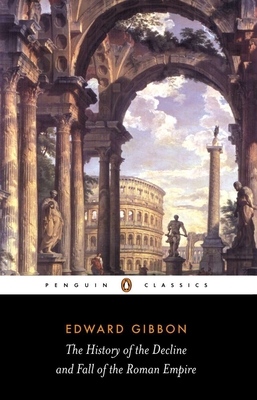 Edward Gibbon's six-volume History of the Decline and Fall of the Roman Empire (1776-88) is among the most magnificent and ambitious narratives in European literature. Its subject is the fate of one of the world's greatest civilizations over thirteen centuries - its rulers, wars and society, and the events that led to its disastrous collapse. Here, in volumes three and four, Gibbon vividly recounts the waves of barbarian invaders under commanders such as Alaric and Attila, who overran and eventually destroyed the West. He then turns his gaze to events in the East, where even the achievements of the Byzantine emperor Justinian and the campaigns of the brilliant military leader Belisarius could not conceal the fundamental weaknesses of their empire.

For more than seventy years, Penguin has been the leading publisher of classic literature in the English-speaking world. With more than 1,700 titles, Penguin Classics represents a global bookshelf of the best works throughout history and across genres and disciplines. Readers trust the series to provide authoritative texts enhanced by introductions and notes by distinguished scholars and contemporary authors, as well as up-to-date translations by award-winning translators.

Edward Gibbon was born in 1737 in Putney, England, and was the only child of his parents to survive infancy. Although his education was frequently interrupted by ill health, his knowledge was far-reaching. His brief career as an undergraduate at Magdalen College, Oxford, ended when he joined the Catholic Church. His father sent him to Lausanne, in Switzerland, where, while studying Greek and French for the next five years, he re-joined the Protestant Church. In 1761 he published his Essai sur l'étude de la Littérature; the English version appeared in 1764. Meanwhile, Gibbon served as a captain in the Hampshire Militia until 1763, when he returned to the Continent. It was while he was in Rome in 1764 that he first conceived the work that was eventually to become The History of the Decline and Fall of the Roman Empire.

In 1774, after the death of his father, Gibbon settled in London and was elected to Parliament where he sat for the next eight years, although he never once spoke in the Commons. He also took his place among the literary circles of London. The first volume of his famous History was published in 1776; it was highly praised for its learning and style but incurred some censure for its treatment of the early Christians. The second and third volumes appeared in 1781 and the final three, which were written in Lausanne, in 1788. He died while on a visit to his friend, Lord Sheffield, who posthumously edited Gibbon's autobiographical papers and published them in 1796.

David Womersley teaches at Jesus College, Oxford, and edited Gibbon's The Decline and Fall of the Roman Empire for Penguin Classics.