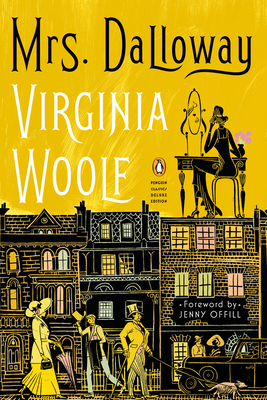 A stunning new edition of Virginia Woolf's engulfing portrait of one day in a woman's life, featuring a new foreword by Jenny Offill, the New York Times bestselling author of Weather and Dept. of Speculation

"Mrs. Dalloway said she would buy the flowers herself." It's one of the most famous opening lines in literature, that of Virginia Woolf's beloved masterpiece of time, memory, and the city. In the wake of World War I and the 1918 flu pandemic, Clarissa Dalloway, elegant and vivacious, is preparing for a party and remembering those she once loved. In another part of London, Septimus Smith is suffering from shell-shock and on the brink of madness. Their days interweave and their lives converge as the party reaches its glittering climax. In a novel in which she perfects the interior monologue and recapitulates the life cycle in the hours of the day, from first light to the dark of night, Woolf achieves an uncanny simulacrum of consciousness, bringing past, present, and future together, and recording, impression by impression, minute by minute, the feel of life itself.

This edition is collated from all known proofs, manuscripts, and impressions to reflect the author's intentions, and includes a catalog of emendations, an illuminating introduction and endnotes by the distinguished feminist critic Elaine Showalter, and a map of Mrs. Dalloway's London.

Virginia Woolf (1882-1941), one of the great twentieth-century authors, was at the center of the Bloomsbury Group and is a major figure in the history of literary feminism and modernism. She published her first novel, The Voyage Out, in 1915, and between 1925 and 1931 produced what are now regarded as her finest masterpieces, including Mrs. Dalloway (1925), To the Lighthouse (1927), and The Waves (1931). She also maintained an astonishing output of literary criticism, short fiction, journalism, and biography, including the playfully subversive Orlando (1928) and the passionate feminist essay A Room of One's Own (1929).

Elaine Showalter (introduction, notes) is Professor of English, Emerita, at Princeton University, and the author of many works of feminist literary criticism.

Stella McNichol (editor) was the author of several critical studies on Virginia Woolf.

“Woolf’s classic feels even more relevant after a year of lockdown has rendered many of us so frantically introspective. . . . This new Penguin Classics edition is superb.” ―Ron Charles, The Washington Post Book Club

“A revelation . . . A remarkably expansive and an irreducibly strange book. Nothing you might read in a plot summary prepares you for the multitudes it contains.” ―Jenny Offill, from the Foreword

“One of the most moving, revolutionary artworks of the twentieth century.” ―Michael Cunningham

"At a time when our most ordinary acts―shopping, taking a walk―have come to seem momentous, a matter of life or death, Clarissa’s vision of everyday shopping as a high-stakes adventure resonates in a peculiar way. We are all Mrs. Dalloway now." ―The New Yorker
Back to top