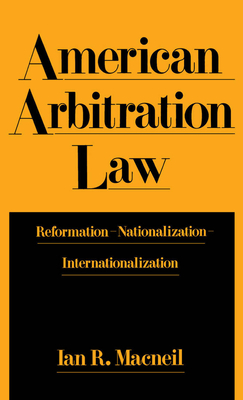 With an overburdened and cumbersome system of court litigation, arbitration is becoming an increasingly attractive means of settling disputes. Government enforcement of arbitration agreements and awards is, however, rife with tensions. Among them are tensions between freedom of contract and the need to protect the weak or ill-informed, between the protections of judicial process and the efficiency and responsiveness of more informal justice, between the federal government and the states. Macneil examines the history of the American arbitration law that deals with these and other tensions. He analyzes the personalities and forces that animated the passing of the United States Arbitration Act of 1925, and its later revolutionizing by the Supreme Court. Macneil also discusses how distorted perceptions of arbitration history in turn distort current law.