Warrior: My Path to Being Brave (Hardcover) 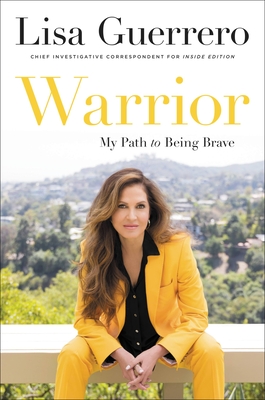 Lisa Guerrero chronicles her iconic career—from dealing with harassment as a sports broadcaster to chasing “bad guys” for Inside Edition—and proves that through small, daily acts, bravery is a muscle we can strengthen over time.

I’ve been a cheerleader. A corporate executive. A Barbie Doll. A sportscaster. A soap opera vixen. A sideline reporter. A Playboy cover model. A Diamond Diva. A red-carpet correspondent. An investigative journalist. A disrupter.

I made Dennis Rodman cry. I’ve interviewed three presidents and hundreds of athletes. I costarred in a viral video that has one billion views. I sued the New England Patriots—and won. I tracked down a murderer. I was hit by a car. I butted heads with Barbara Walters. I even played myself in a movie starring Brad Pitt.

During her career in sports broadcasting, Guerrero covered Super Bowls, Worlds Series, NBA Finals, and interviewed sports superstars. From the outside it seemed glamourous, but often she was miserable, told to smile more, argue less, and show a lot of leg and cleavage. Colleagues would joke—sometimes on national TV—that she clinched big interviews because of sexual acts rather than talent. She made a mistake on air during the opening game on Monday Night Football that cost her her sportscasting career... and almost her life.

Fast forward a few years, and Guerrero has achieved phenomenal success as Inside Edition’s Chief Investigative Correspondent. Her stories have led to arrests, changed federal legislation and policies at Fortune 500 companies, and helped shine a light on crime, scams, child abuse, and even cold case murders. And in the last decade alone, she has won over thirty-five national journalism honors and awards.

Today, Guerrero is bombarded with emails and direct messages from people of every generation who all want to know the same thing: “How are you so brave? How can I be brave too?” Women dealing with husbands, friends, in-laws, co-workers, and bosses ask for the courage to request raises, be taken seriously at meetings, and stand up to abusive spouses. Teens and pre-teens ask for advice on dealing with bullies, teachers, and parents. Warrior—filled with the incisive stories of failure, struggles, challenges, perseverance, and finally, success—is her answer.

Award-winning journalist Lisa Guerrero is the Chief Investigative Correspondent for Inside Edition and travels the country covering crimes, scams, cold cases, and consumer reports. She has won eight National Headliner Awards, beating CNN’s Anderson Cooper, and has been honored twice by The National Press Club. In the past year alone, Guerrero’s investigations have racked up an additional 120 million views on YouTube. Her investigations have been profiled in Newsweek, The New York Times and The Washington Post. Before joining Inside Edition, Guerrero spent over a decade as a nationally recognized sports reporter on CBS, Fox, ABC and ESPN, having anchored and reported for dozens of shows including the wildly popular “The Best Damn Sports Show Period.” She has interviewed hundreds of athletes, and was the was the first journalist (male or female) to ask Barry Bonds, on camera, if he’d taken steroids. She has broadcast from seven Super Bowls, five World Series, and four NBA national championship games, as well as the World Figure Skating championships. In 2003, she was the sideline reporter for ABC’s Monday Night Football--Al Michaels called the ratings increase that season “the Guerrero factor.” She lives in Los Angeles.

"In a revealing new memoir, the journalist, former NFL cheerleader, and sportscaster details the sexist bullying that almost broke her--and how she reclaimed her life."—People

"Shakespeare famously asked 'What’s in a name?' In the case of Lisa Guerrero, the answer is, 'Everything you need to know about her.'﻿ For a woman whose last name translates to 'warrior,' Lisa Guerrero has had to fight for everything she has achieved. Blessed with incredible beauty, Lisa has often been dismissed by others and had to prove she belonged—whether on the sidelines covering the NFL or working as a fearless correspondent for Inside Edition. Despite great loss as a young girl, Lisa’s personal story is a roadmap for anyone who has big dreams—and only needs to believe in themself to achieve them."—Deborah Norville, NYT Best-Selling Author & Anchor of Inside Edition

"Lisa Guerrero is exactly what her last name means in Spanish, a warrior who inspires us to push forward. The book, Warrior, is a true journey of a tenacious woman who learned to find her voice and strength through painful experiences that no one knew she was enduring. Racism, sexism, misogyny, bullying, vicious criticism, rejection, and a broken marriage are everything Lisa Guerrero has experienced in her career as a Latina, sports journalist, investigative correspondent, and actress. It's a miracle that she is still standing today. I could not put down this book because every chapter brought another sports legend or powerful entertainer and a harsh lesson learned. I recommend Lisa's book to anyone who has questioned their role in their profession and personal life and even whether they should still exist in this world. Warrior will leave you inspired and empowered to take on the world."—Rebecca Aguilar, Emmy award-winning reporter, SPJ President (2021-2022), Founder of Latinas in Journalism, and Founder of Wise Latinas Linked

“Having spent many nights standing shoulder to shoulder in the trenches with Lisa Guerrero as she fought to overcome stereotypes and become a trusted connection for  sports fans everywhere, I can confirm that, indeed, Warrior is the perfect title for this book. Even amid the glares and grumblings of some of the most celebrated sports figures in the world, Lisa never backed down, never gave in, never stopped pushing for the truth. Her story is one of unwavering resilience and uncommon dignity, and I am proud to be even a small part of it.”
—Bill Plaschke, Los Angeles Times columnist and panelist on ESPN’s Around the Horn

"Much like its author, Warrior is disarmingly candid, unapologetically honest. Courage, oft-celebrated as a trait, is actually a choice we make. Lisa's odyssey is the story of what one person is able to achieve when she chooses to be brave."
—John Walters, Sports Illustrated

“This book is a juicy page-turner. Lisa does a great job illustrating that, in any industry, women have to work harder and fight for their own agency. She is a true girl’s girl and a champion of women.”—Kathy Griffin, New York Times bestselling author, Emmy- and Grammy-award winning comedian

"Guerrero writes with a frank candidness, and her deep convictions are evident on every page. The author’s fans are in for a treat."—Publisher's Weekly

"...an essential read. [Guerrero's] storytelling is exquisite and emotional."—Library Journal