The Drunkard's Walk: How Randomness Rules Our Lives (Hardcover) 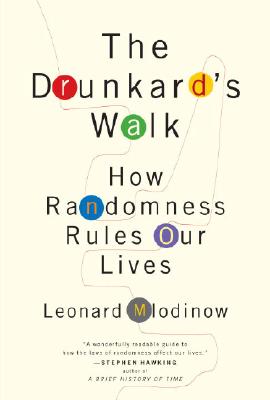 By Leonard Mlodinow
Email or call for price
Unavailable

In this irreverent and illuminating book, acclaimed writer and scientist Leonard Mlodinow shows us how randomness, change, and probability reveal a tremendous amount about our daily lives, and how we misunderstand the significance of everything from a casual conversation to a major financial setback. As a result, successes and failures in life are often attributed to clear and obvious cases, when in actuality they are more profoundly influenced by chance.
The rise and fall of your favorite movie star of the most reviled CEO--in fact, of all our destinies--reflects as much as planning and innate abilities. Even the legendary Roger Maris, who beat Babe Ruth's single-season home run record, was in all likelihood not great but just lucky. And it might be shocking to realize that you are twice as likely to be killed in a car accident on your way to buying a lottery ticket than you are to win the lottery.
How could it have happened that a wine was given five out of five stars, the highest rating, in one journal and in another it was called the worst wine of the decade? Mlodinow vividly demonstrates how wine ratings, school grades, political polls, and many other things in daily life are less reliable than we believe. By showing us the true nature of change and revealing the psychological illusions that cause us to misjudge the world around us, Mlodinow gives fresh insight into what is really meaningful and how we can make decisions based on a deeper truth. From the classroom to the courtroom, from financial markets to supermarkets, from the doctor's office to the Oval Office, Mlodinow's insights will intrigue, awe, and inspire.
Offering readers not only a tour of randomness, chance, and probability but also a new way of looking at the world, this original, unexpected journey reminds us that much in our lives is about as predictable as the steps of a stumbling man fresh from a night at the bar.

Leonard Mlodinow received his doctorate in physics from the University of California, Berkeley, was an Alexander von Humboldt fellow at the Max Planck Institute, and now teaches about randomness to future scientists at Caltech. Along the way he also wrote for the television series "MacGyver "and "Star Trek: The Next Generation. "His previous books include "Euclid's Window: The Story of Geometry from Parallel Lines to Hyperspace, Feynman's Rainbow: A Search for Beauty in Physics and in Life, "and, with Stephen Hawking, "A Briefer History of Time. "He lives in South Pasadena, California.

“A wonderfully readable guide to how the mathematical laws of randomness affect our lives.”--Stephen Hawking, author of A Brief History of Time

"The Drunkard's Walk is a magnificent exploration of the role that chance plays in our lives. Often historical, occasionally hysterical, and consistently smart and funny, this book challenges everything we think we know about how the world works. The probability is high that you will be entertained and enlightened by this intelligent charmer."--Daniel Gilbert, professor of psychology, Harvard University, and author of Stumbling on Happiness

"Fast, chatty, very readable, and a fine introduction to ideas that everyone should know." --David Berlinski, author of A Tour of the Calculus

“A primer on the science of probability.”–The Washington Post Book World

“A jaunty read worthy of any beach or airplane. . . . Mlodinow has an intimate perspective on randomness. . . . He draws direct links from the works of history's greatest minds to the deeds of today's not-so-great ones, explaining phenomena like the prosecutor's fallacy (which helped acquit O.J. Simpson) and the iPod shuffle function (eventually programmed not to be truly random, lest songs hit upon eerie playing streaks).”–The Austin Chronicle

“Please read The Drunkard’s Walk: How Randomness Rules Our Lives by Leonard Mlodinow, a history, explanation, and exaltation of probability theory. . . . Mlodinow . . . thinks in equations but explains in anecdote, simile, and occasional bursts of neon. . . .The results are mind-bending.”–Fortune

“Challenges our intuitions about probability and explores how, by understanding randomness, we can better grasp our world.”–Seed Magazine

“[Mlodinow is] the perfect guy to reveal the ways unrelated elements can relate and connect.”–The Miami Herald