The American Plague: The Untold Story of Yellow Fever, The Epidemic That Shaped Our History (Paperback) 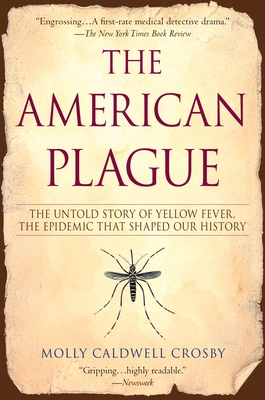 In this account, a journalist traces the course of the infectious disease known as yellow fever, “vividly [evoking] the Faulkner-meets-Dawn of the Dead horrors” (The New York Times Book Review) of this killer virus.

Over the course of history, yellow fever has paralyzed governments, halted commerce, quarantined cities, moved the U.S. capital, and altered the outcome of wars. During a single summer in Memphis alone, it cost more lives than the Chicago fire, the San Francisco earthquake, and the Johnstown flood combined.

In 1900, the U.S. sent three doctors to Cuba to discover how yellow fever was spread. There, they launched one of history's most controversial human studies. Compelling and terrifying, The American Plague depicts the story of yellow fever and its reign in this country—and in Africa, where even today it strikes thousands every year. With “arresting tales of heroism,” (Publishers Weekly) it is a story as much about the nature of human beings as it is about the nature of disease.

Molly Caldwell Crosby is the national bestselling author of Asleep: The Forgotten Epidemic That Remains One of Medicine's Greatest Mysteries and The American Plague: The Untold Story of Yellow Fever, the Epidemic That Shaped Our History, which has been nominated for several awards. Crosby holds a master's degree in nonfiction and science writing from Johns Hopkins University and previously worked for National Geographic magazine. Her writing has appeared in Newsweek, Health, and USA Today, among others.