The Dover Anthology of American Literature, Volume I, 1: From the Origins Through the Civil War (Dover Thrift Editions #1) (Paperback) 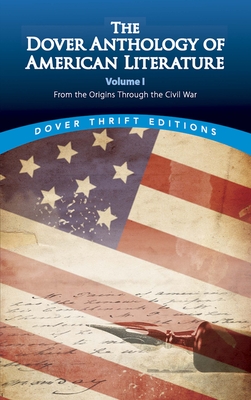 This is book number 1 in the Dover Thrift Editions series.

This is a fantastic compilation of some really important pieces of American Literature. If you are a college student or even a motivated high school student, you will definitely want this on your bookshelf. Most importantly though, if you are someone who just genuinely enjoys reading and would like to expand your repertoire to some of the best in American literature, this is the book for you -- Old Musty Books
Ranging from colonial times to the mid-19th century, this compact and inexpensive anthology offers a fascinating overview of early American literature. The authoritative texts are supplemented with informative introductory notes and suggestions for further reading.
Starting with Cherokee creation myths and Powhatan's moving speech, Why Should You Destroy Us, Who Have Provided You with Food, the 18th-century selections include the writings of poets Anne Bradstreet and Phillis Wheatley; preacher Jonathan Edwards; statesmen Benjamin Franklin, Thomas Paine, and others. From the early and mid-19th century come excerpts from the journals of Lewis and Clark; stories by Nathaniel Hawthorne, Edgar Allan Poe, and Louisa May Alcott; the poetry of Henry Wadsworth Longfellow and Walt Whitman; and essays, speeches, verse, and memoirs by other prominent Americans.

An English professor at the City University of New York's Kingsborough College, Bob Blaisdell is the editor of numerous Dover Thrift Editions and many other books. He has published essays about his own experiences as a teacher and regularly reviews books for the San Francisco Chronicle and the Christian Science Monitor.
Back to top