Secret of the Shadow Beasts (Hardcover) 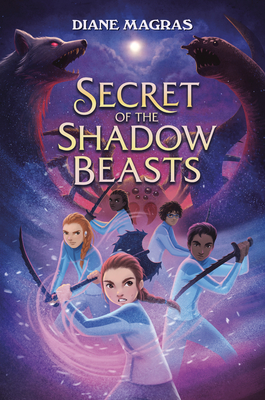 For fans of Dragon Pearl and the Lockwood & Co. series comes a swift-moving contemporary fantasy about a young girl tasked with destroying deadly shadow creatures.

In Brannland, terrifying beasts called Umbrae roam freely once the sun sets, so venomous that a single bite will kill a full-grown adult—and lately, with each day that passes, their population seems to double. The only people who can destroy them are immune children like Nora, who are recruited at the age of seven to leave their families behind and begin training at a retrofitted castle called Noye’s Hill. But despite her immunity, Nora’s father refused to let her go. Now, years after his death by Umbra attack, Nora is twelve, and sees her mother almost killed by the monsters too. That’s when Nora decides it’s time for her to join the battle. Once she arrives at Noye’s Hill, though, she and her new friends are left with more questions than answers: Where are the Umbrae coming from? Could the government be covering up the true reason their population has whirled out of control? And was Nora’s father, the peaceful, big-hearted man who refused to let Nora fight, in on the treacherous secret?

Diane Magras (she/her) is the award-winning author of The New York Times Editors' Choice The Mad Wolf's Daughter, as well as its companion novel, The Hunt for the Mad Wolf's Daughter. An unabashed fan of libraries (where she wrote her first novel as a teenager), history from all voices, and the perfect cup of tea, Diane lives in Maine with her husband and son. You can find her at www.dianemagras.com.

"Percy Jackson meets The Witcher in this fast-paced middle-grade fantasy filled with creatures of the night. . . . Nora proves to be an endearing and courageous protagonist . . . [R]eaders will be equally enchanted by the world of Brannland and the mythology behind the Umbrae. A thrilling fantasy."—Booklist

"Part science fiction, part medieval quest, Secret of the Shadow Beasts sparks with action and swells with emotion. Diane Magras has created a diverse cast of compelling kid characters who forge strong friendships, fight off terrifying beasts, and above all, seek the truth. I couldn’t put it down!"—Rajani LaRocca, Newbery Honor-winning author of Red, White, and Whole; Midsummer's Mayhem; and Much Ado About Baseball

"Brimming with thrills and high-stakes action, this nonstop adventure swoops like a battle-axe, even as it races along with courage and heart. This one will hold a high place on my bookshelf."—Brad McLelland, co-author of the award-winning Legends of the Lost Causes trilogy

"This middle-grade book filled with action and heart is like Dungeons & Dragons meets Stranger Things. Secret of the Shadow Beasts will keep young readers rooting for Nora, the story's brave protagonist, and her friends, reminding us of the importance of taking care of our earth as well as each other."—Samantha M Clark, author of Arrow

"With Secret of the Shadow Beasts [Magras] begins a terrific new series blending her penchant for medieval settings and weaponry with modern gaming elements. Great characters and a taut narrative await you!"—Kenny Brechner, Devaney Doak & Garrett Booksellers
Back to top