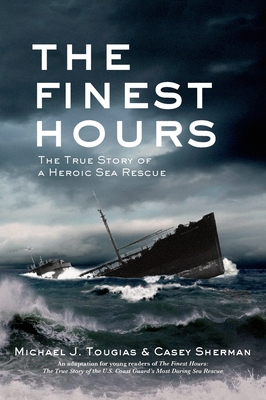 On the night of February 18, 1952, during one of the worst winter storms that New England has ever seen, two oil tankers just off the shore of Cape Cod were torn in half by the force of the storm. This middle-grade adaptation of an adult nonfiction book tells the story of the shipwreck and a harrowing Coast Guard rescue when four men in a tiny lifeboat overcame insurmountable odds and saved more than 30 stranded sailors. This is a fast-paced, uplifting story that puts young readers in the middle of the action. It's a gripping story of heroism and survival with the same intensity as the bestselling book and movie The Perfect Storm.

Michael J. Tougias is the author of many award-winning true rescue stories, including the New York Times-bestseller The Finest Hours, A Storm Too Soon, Into the Blizzard, and Attacked at Sea. He also published a memoir, The Waters Between Us: A Boy, A Father, Outdoor Misadventures and the Healing Power of Nature. A frequent lecturer on his work, Tougias splits his time between Massachusetts and Florida.

Casey Sherman is an award winning journalist and bestselling author of The Finest Hours, Bad Blood, Black Irish, and Black Dragon. He received the Edward R. Murrow Award for Journalistic Excellence as a member of the CBS Boston news team, and has been nominated for an Emmy Award. A featured guest on major television networks and news programs, Sherman has lectured at The National Press Club and the US Coast Guard Command Center in Washington, D.C. He lives in Marshfield, Massachusetts.

“This poignant history should be an easy sell to readers of adventure, seafaring, or rescue stories. A Disney film is in development.” —School Library Journal

“The Finest Hours is a touching account, a sensitive rendering of what might be called four indescribably chaotic conditions. . . . Tougias and Sherman never sensationalize, never go beyond the facts, and yet capture all the pain, physical and emotional, of the survivors and their families.” —Providence Journal

“This book captures the wit, grit and sacrifice of Coasties and their boats.” —Minneapolis Star Tribune

“Tougias and Sherman reach their peak of tension in the sink-or-swim moments when mariners abandoned ship and chanced their lives on their rescuers' skill and bravery . . .excellent.” —Booklist

“Gripping. . . . Tougias and Sherman ably narrate the desperate struggles of crew members on both the wrecks and the rescue boats . . . will make readers appreciate the bravery of the men who put their lives on the line . . . action-packed.” —Publishers Weekly

“A gripping tale of Coast Guard heroism . . . an action-packed account of rescue at sea.” —Kirkus Reviews