The Texas Rangers in Transition: From Gunfighters to Criminal Investigators, 1921-1935 (Hardcover) 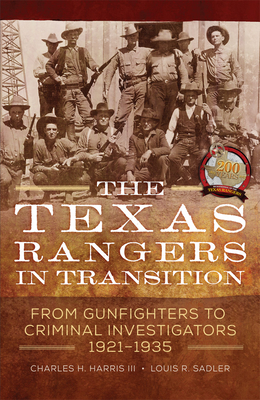 Official Texas Ranger Bicentennial(TM) Publication Newly rich in oil money, and all the trouble it could buy, Texas in the years following World War I underwent momentous changes--and those changes propelled the transformation of the state's storied Rangers. Charles H. Harris III and Louis R. Sadler explore this important but relatively neglected period in the Texas Rangers' history in this book, a sequel to their award-winning The Texas Rangers and the Mexican Revolution: The Bloodiest Decade, 1910-1920. In a Texas awash in booze and oil in the Prohibition years, the Rangers found themselves riding herd on gamblers and bootleggers, but also tasked with everything from catching murderers to preventing circus performances on Sunday. The Texas Rangers in Transition takes up the Rangers' story at a time of political turmoil, as the largely rural state was rapidly becoming urban. At the same time, law enforcement was facing an epidemic of bank robberies, an increase in organized crime, the growth of the Ku Klux Klan, Prohibition enforcement--new challenges that the Rangers met by transitioning from gunfighters to criminal investigators. Steeped in tradition, reluctant to change, the agency was reduced to its nadir in the depths of the Depression, the victim of slashed appropriations, an antagonistic governor, and mediocre personnel. Harris and Sadler document the further and final change that followed when, in 1935, the Texas Rangers were moved from the governor's control to the newly created Department of Public Safety. This proved a watershed in the Rangers' history, marking their transformation into a modern law enforcement agency, the elite investigative force that they remain to this day.
Back to top