The Way They Were: How Epic Battles and Bruised Egos Brought a Classic Hollywood Love Story to the Screen (Hardcover) 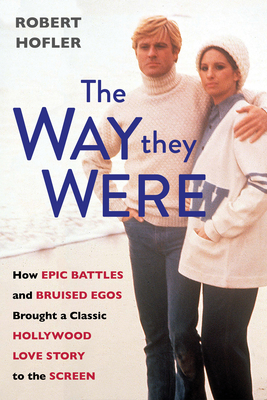 Coinciding with the 50th anniversary of “The Way We Were,” this intriguing and impeccably researched book is the first ever account of the making of the classic film starring Barbara Streisand and Robert Redford, revealing the full story behind its genesis and continued controversies, its many deleted scenes, its much-anticipated but never-filmed sequel, and the real-life romance that inspired this groundbreaking love story…

It’s one of the greatest movie romances of all time. Fifty years on, the chemistry between Barbra Streisand as Jewish working-class firebrand Katie Worosky and Robert Redford as all-American golden boy Hubbell Gardiner remains potent. Yet the friction and controversy surrounding The Way We Were was so enormous, the movie was nearly never made at all.

Screenwriter Arthur Laurents wrote the role of Katie with Streisand in mind. Casting Hubble was another matter. Redford, already a superstar, was reluctant to play what he perceived as the “Ken doll” to Streisand’s lead, and demanded his role be changed and expanded. Laurents resisted, telling director Sydney Pollack, “You’ll ruin the movie if it ends up being about two people. It’s Katie’s story, not Hubbell’s.” Despite his protests, ten writers—among them Francis Ford Coppola—were brought on to rework the script.

Laurents’s fears were well founded, and the first preview was disastrous. Producer Ray Stark and Pollack, with Redford's approval, cut several scenes, upsetting Streisand and Laurents. Yet the edits worked. Such was the movie’s success that Redford was open to making a sequel, though Laurents’s script was never greenlit. Some of those "lost" scenes are now being restored to the film for its 50th anniversary.

It’s also the deep, surprising love story at the heart of The Way They Were that makes it so memorable, and Robert Hofler explores its inspiration—the relationship between Laurents, a Jewish Brooklyn-born college leftist, and his longtime partner, Tom Hatcher. Drawing on a vast trove of Laurents’s and Pollack’s unpublished writings, as well as interviews with Streisand, Redford, and other key players, this is the definitive account of a film that changed the rules of moviemaking and defined romance ever since.

Robert Hofler is the lead theater critic at TheWrap and author of bestselling, critically acclaimed biographies, including Money, Murder, and Dominick Dunne: A Life in Several Acts; The Man Who Invented Rock Hudson; Party Animals; and the Lambda Literary Award nominated Sexplosion: From Andy Warhol to A Clockwork Orange, How a Generation of Pop Rebels Broke All the Taboos. The recipient of the 2020 Los Angeles Press Club Award for Best Theater Reviews, he previously has been an editor and writer for Life, Us Weekly, and Variety. He lives in New York City and can be found online at RobertHofler.com.

Advanced Praise for THE WAY THEY WERE

“A rich, gossipy tale… Author Robert Hofler’s detailed look at the movie’s creation, the cleverly titled “The Way They Were,” tells a sweet and sour story behind the cameras.” —Associated Press

“Theater critic Hofler (Money, Murder, and Dominick Dunne) delivers a spellbinding behind-the-scenes look at the seminal 1973 film The Way We Were. Hofler’s prose sparkles, and he successfully blends histrionics with on-screen magic. The captivating result makes clear that the drama happening behind the camera can be just as gripping as what’s in front of it.” —Publishers Weekly, STARRED REVIEW

“Just in time for the film’s 50th anniversary, theater critic Hofler (Money, Murder, and Dominick Dunne: A Life in Several Acts) digs deep to find the drama that went on behind-the-scenes.  …this is a detailed and well-researched biography of a popular film that avid fans and film students will likely find fascinating.” —Library Journal

“The Way They Were has it all: Huge egos on collision courses; great showbiz gossip; and insight into how Hollywood movies once got made. But at its center is the love story between Arthur Laurents, a Broadway legend with the sharpest of tongues, and Tom Hatcher, who put up with it all. It's a complicated love story to be sure, but that's what makes Robert Hofler's book so compelling." —Michael Riedel, author of Razzle Dazzle: The Battle for Broadway

"No one captures the magic of movie-making, from Fade In to Fade Out, better than Robert Hofler. In The Way They Were, he delivers a riveting account of a cinematic epic full of colorful details and characters who leap off the page. Filled with prodigious research, shrewd insight, and driven by a powerful narrative, the book provides a luminous chronicle of personalities ready for their close-ups and the business that enables them." —Bob Spitz, author of The Beatles and Dearie: The Remarkable Life of Julia Child

"And you thought Katie and Hubbell’s relationship was complicated? Wait until you delve into the making of The Way We Were. In scrupulous journalistic detail, Robert Hofler relates the behind-the-scenes internecine conflicts and intricacies of one the screen’s great romances. What surfaces is a backstory as captivating—and, at times, as heartbreaking—as The Way We Were itself." —Stephen M. Silverman, author of David Lean and The Catskills: Its History and How It Changed America

"For movie lovers, Robert Hofler's surprising exploration of the making of The Way We Were contains secrets and insights into the writing and producing of one of the most romantic movies of the 1970s. But for Barbra Streisand fans it is a definite must-read as a key milestone in the evolution of a star." —Sharon Waxman, author of Loot and Rebels on the Backlot

"Robert Hofler’s lively behind-the-scenes tale captures the complicated dance of star power, talent, and politics that made The Way We Were such a breakout Hollywood romance. With insightful, often droll commentary and rich detail, he entertains and illuminates the art of bringing a classic to the screen." —Becky Aikman, author of Off the Cliff: How the Making of Thelma & Louise Drove Hollywood to the Edge

"Robert Hofler brings his vast knowledge of popular culture, movies, and the anxious, talented and flawed people who create them to tell the tale of the making of The Way We Were, one of Hollywood’s last great romantic melodramas. Hofler presents a legendary cast of characters, starting with the gifted but bruising screenwriter Arthur Laurents, to the combative producer Ray Stark, to the savvy director Sydney Pollack, who deftly navigates around the conflicts and contradictions between the movie’s two super-stars, Barbra Streisand, the nervous perfectionist, and Robert Redford, the nonchalant cool guy. Hofler’s portraits are intimate, compassionate yet unblinking; his eye and ear for a good story—whether Pollack’s overnight trimming with a razor blade of 11 minutes of bloat from the final cut; or how Marvin Hamlisch’s stirring melody helped paper over some of the glaring defects of the plot—help keep the narrative moving along at rapid speed. The book is a delivery van stuffed with great dish, couplings and uncouplings, and powerful insights into The Way It Was Done. —Glenn Frankel, Pulitzer Prize-winning journalist and author of Shooting Midnight Cowboy: Art, Sex, Loneliness, Liberation and the Making of a Dark Classic.

“A provocative romp through the culture wars and the transformation in America’s sexual politics.” —The Wall Street Journal on Sexplosion: From Andy Warhol to a Clockwork Orange

“Lively [and] unapologetically profane…Hofler covers pop-culture figures and their creations with an expert’s depth of knowledge …resulting in a delightful journey through a short-lived but influential period.” —Publishers Weekly (Starred Review) on Sexplosion: From Andy Warhol to a Clockwork Orange

“A spirited biography…Hofler proves to be an apt and entertaining chronicler of Dunne’s eventful, turbulent, and often sorrowful life.” —Kirkus Reviews on Money, Murder and Dominick Dunne

“During the O. J. Simpson trial, everyone wanted a piece of Dunne and his inside scoop, and Hofler (Sexplosion, 2014) succeeds in giving us that piece and the gossip that inevitably comes with it. In each chapter, Hofler highlights major highs and lows while capturing the dichotomy of Dunne’s public persona and private life.” —Booklist on Money, Murder and Dominick Dunne

“Fun, fascinating examination of the moment when American and British culture seemed to lose all inhibitions… Sparkling history of an artistically spirited age.” —Kirkus Reviews on Sexplosion: From Andy Warhol to a Clockwork Orange

“Hofler delivers a hell of a tour of Hollywood egotism… Fast-paced, funny and occasionally horrifying portrait of a compulsive personality and the culture of excess that both created and destroyed him.” —Kirkus Reviews on Party Animals

“Hofler is well-matched to this shark-tank of a life. … He writes with a bright sneer.” —The Washington Post on The Man Who Invented Rock Hudson

“Knowledgeable…It was a dangerous time, and one that Hofler evokes vividly.” —Los Angeles Times on The Man Who Invented Rock Hudson

“Hofler … delves into this shadowy, sometimes seamy world with particular relish, and his writing has all the sizzle of the films his subjects starred in.” —Publishers Weekly on The Man Who Invented Rock Hudson