A Cup of Water Under My Bed: A Memoir (Paperback) 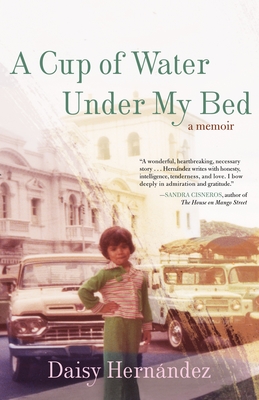 The PEN Literary Award–winning author “writes with honesty, intelligence, tenderness, and love” about her Colombian-Cuban heritage and queer identity in this poignant coming-of-age memoir (Sandra Cisneros, author of The House on Mango Street)

In this lyrical, coming-of-age memoir, Daisy Hernández chronicles what the women in her Cuban-Colombian family taught her about love, money, and race. Her mother warns her about envidia and men who seduce you with pastries, while one tía bemoans that her niece is turning out to be “una india” instead of an American. Another auntie instructs that when two people are close, they are bound to become like uña y mugre, fingernails and dirt, and that no, Daisy’s father is not godless. He’s simply praying to a candy dish that can be traced back to Africa.

These lessons—rooted in women’s experiences of migration, colonization, y cariño—define in evocative detail what it means to grow up female in an immigrant home. In one story, Daisy sets out to defy the dictates of race and class that preoccupy her mother and tías, but dating women and transmen, and coming to identify as bisexual, leads her to unexpected questions. In another piece, NAFTA shuts local factories in her hometown on the outskirts of New York City, and she begins translating unemployment forms for her parents, moving between English and Spanish, as well as private and collective fears. In prose that is both memoir and commentary, Daisy reflects on reporting for the New York Times as the paper is rocked by the biggest plagiarism scandal in its history and plunged into debates about the role of race in the newsroom.

A heartfelt exploration of family, identity, and language, A Cup of Water Under My Bed is ultimately a daughter’s story of finding herself and her community, and of creating a new, queer life.

Daisy Hernández is the coeditor of Colonize This! Young Women of Color on Today’s Feminism and the former editor of ColorLines magazine. She speaks at colleges and conferences about feminism, race, and media representations, and her writing has appeared in the New York Times, Ms. magazine, CultureStrike, In These Times, Bellingham Review, Fourth Genre, and Hunger Mountain, and on NPR’s All Things Considered. In 2022, she won the PEN Literary Award for The Kissing Bug (Tin House).

“Warm and thoughtful, Hernández writes with cleareyed compassion about living, and redefining success, at the intersection of social, ethnic and racial difference. Personal storytelling at its most authentic and heartfelt.”
—Kirkus Reviews

“Journalist, feminist, and first-time memoirist Hernández presents a coming-of-age story that dives into the complexities of language, sexuality, and class. … An accessible, honest look at the often heart-wrenching effects of intergenerational tension on family ties.”
—Booklist

“This book is a compelling glimpse into the life of a young Latina struggling to hold onto her background and make her way in a world she often finds difficult to embrace. Hernandez's use of language is often poetic, especially when intermingling Spanish and English, with the cultural tones of each.”
—Windy City Times

“By the end of this beautiful book, Daisy Hernández, a queer American Latina, has threaded Spanish and English together to create an inimitable new language in a brave and brilliant negotiation of a multilingual world.”
—Los Angeles Review of Books

“With wit and respectful grace, Hernández shares stories of love for family, of strong (despite herself) roots, and of assimilation and claiming who you are without losing who you were.”
—Dallas Voice

“During a time in history when so much is said about women of color, working-class folks, immigrants, Latinas, poor people, and los depreciados but seldom from them, Hernández writes with honesty, intelligence, tenderness, and love. I bow deeply in admiration and gratitude.”
—Sandra Cisneros, author of The House on Mango Street

“A striking and illuminating memoir of stark beauty that challenges our notions of identity and feminine power; absolutely riveting and unforgettable.”
—Patricia Engel, author of It’s Not Love, It’s Just Paris

“Hernández writes with grace and clarity about the singular joys and unique pains of growing up in two worlds. … A marriage of power and poetry.”
—Laila Lalami, author of Hope and Other Dangerous Pursuits

“Hernández is a stone-cold truth teller, and her talent is eclipsed only by her fearlessness. If this debut is a sign of what’s to come, plan to have your heart and head broken wide open. Again and again.”
—John Murillo, author of Up Jump the Boogie