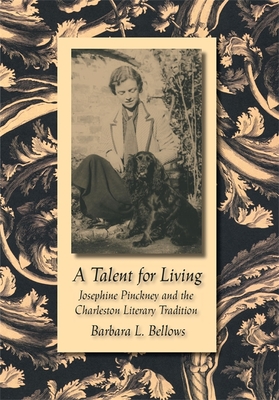 Josephine Pinckney (1895--1957) was an award-winning, best-selling author whose work critics frequently compared to that of Jane Austen, Edith Wharton, and Isak Dinesen. Her flair for storytelling and trenchant social commentary found expression in poetry, five novels -- Three O'Clock Dinner was the most successful -- stories, essays, and reviews. Pinckney belonged to a distinguished South Carolina family and often used Charleston as her setting, writing in the tradition of Ellen Glasgow by blending social realism with irony, tragedy, and humor in chronicling the foibles of the South's declining upper class. Barbara L. Bellows has produced the first biography of this very private woman and emotionally complex writer, whose life story is also the history of a place and time -- Charleston in the first half of the twentieth century.
In A Talent for Living, Pinckney's life unfolds like a novel as she struggles to escape aristocratic codes and the ensnaring bonds of southern ladyhood and to embrace modern freedoms. In 1920, with DuBose Heyward and Hervey Allen, she founded the Poetry Society of South Carolina, which helped spark the southern literary renaissance. Her home became a center of intellectual activity with visitors such as the poet Amy Lowell, the charismatic presidential candidate Wendell Willkie, and the founding editor of theSaturday Review of Literature Henry Seidel Canby. Sophisticated and cosmopolitan, she absorbed popular contemporary influences, particularly that of Freudian psychology, even as she retained an almost Gothic imagination shaped in her youth by the haunting, tragic beauty of the Low Country and its mystical Gullah culture.
A skilled stylist, Pinckney excelled in creating memorable characters, but she never scripted an individual as engaging or intriguing as herself. Bellows offers a fascinating, exhaustively researched portrait of this onetime cultural icon and her well-concealed personal life.

Barbara L. Bellows is the author of Benevolence among Slaveholders: Caring for the Poor in Charleston, 1760--1860 and coauthor of God and General Longstreet: Essays on the Lost Cause and the Southern Mind. Formerly a professor at Middlebury College, she is a writer and a historian who divides her time between her hometown of Charleston, South Carolina, and Pound Ridge, New York.
Back to top