The Amazing Adventures of Kavalier & Clay (with bonus content): A Novel (Paperback) 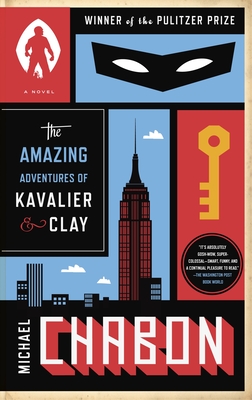 WINNER OF THE PULITZER PRIZE • NEW YORK TIMES BESTSELLER • The epic, beloved novel of two boy geniuses dreaming up superheroes in New York’s Golden Age of comics, now with special bonus material by the author—soon to be a Showtime limited series

Named one of the 10 Best Books of the Decade by Entertainment Weekly • Finalist for the PEN/Faulkner Award, National Book Critics Circle Award, and Los Angeles Times Book Prize

A “towering, swash-buckling thrill of a book” (Newsweek), hailed as Chabon’s “magnum opus” (The New York Review of Books), The Amazing Adventures of Kavalier & Clay is a triumph of originality, imagination, and storytelling, an exuberant, irresistible novel that begins in New York City in 1939.

A young escape artist and budding magician named Joe Kavalier arrives on the doorstep of his cousin, Sammy Clay. While the long shadow of Hitler falls across Europe, America is happily in thrall to the Golden Age of comic books, and in a distant corner of Brooklyn, Sammy is looking for a way to cash in on the craze. He finds the ideal partner in the aloof, artistically gifted Joe, and together they embark on an adventure that takes them deep into the heart of Manhattan, and the heart of old-fashioned American ambition. From the shared fears, dreams, and desires of two teenage boys, they spin comic book tales of the heroic, fascist-fighting Escapist and the beautiful, mysterious Luna Moth, otherworldly mistress of the night. Climbing from the streets of Brooklyn to the top of the Empire State Building, Joe and Sammy carve out lives, and careers, as vivid as cyan and magenta ink.

Spanning continents and eras, this superb book by one of America’s finest writers remains one of the defining novels of our modern American age.

Michael Chabon is the bestselling and Pulitzer Prize–winning author of The Mysteries of Pittsburgh, Wonder Boys, The Amazing Adventures of Kavalier & Clay, Summerland (a novel for children), The Final Solution, The Yiddish Policemen’s Union, and Gentlemen of the Road, as well as the short story collections A Model World and Werewolves in Their Youth and the essay collections Maps and Legends and Manhood for Amateurs. He is the chairman of the board of the MacDowell Colony. He lives in Berkeley, California, with his wife, the novelist Ayelet Waldman, and their children.

“The depth of Chabon’s thought, his sharp language, his inventiveness, and his ambition make this a novel of towering achievement.”—The New York Times Book Review

“I’m not sure what the exact definition of a ‘great American novel’ is, but I’m pretty sure that Michael Chabon’s sprawling, idiosyncratic, and wrenching new book is one.”—New York

“The themes are masterfully explored, leaving the book’s sense of humor intact and characters so tightly developed they could walk off the page.”—Newsweek

“A page-turner in the most expansive sense of the word: its gripping plot pushes readers forward. . . . Chabon is a reader’s writer, with sentences so cozy they’ll wrap you up and kiss you goodnight.”—Chicago Tribune
Back to top