Behold!!! the Protong: Extracts from the 39 Volumes of My Science "Zermatism" (Hardcover) 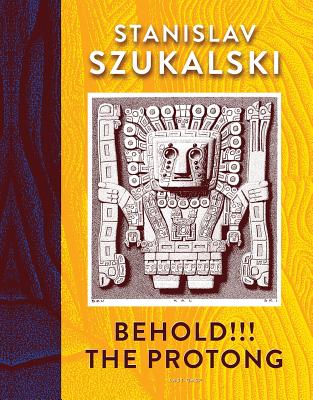 Szukalski is now the subject of the critically acclaimed 2018 Netflix documentary Struggle: The Life and Lost Art of Szukalski directed by Irek Dobrowolski and produced by Leonardo DiCaprio. Extracts from the 39 volumes of my science "Zermatism," based on new interpretations of petroglyphic communications, in which will be revealed the most precedent-shattering and up-turning of all notions on our origins. Including samplings from Anthropolitical Motivations, The Deluged Gods, and Listen to These Stones Stanislav Szukalski (1893-1987) was a Polish-born sculptor, writer, graphic artist, and heretic. Highly regarded in both the US and Poland between the World Wars, he lapsed into obscurity, living and working in "America's Cultural Siberia" (Southern California) until comic art collector Glenn Bray rediscovered him in 1973. For forty years, Szukalski had developed his all-encompassing science "Zermatism" about the origin of Man, laid down in 39 heavily illustrated volumes with subjects such as "Universal Pictography," "The Flood Scumline," and "Anthropolitical Motivations." The work sets out to prove, among much else, that "Man-apes" make bad politicians, and that all Humanity stemmed from Easter Island, sharing a common protolanguage, "Protong" (bearing a striking resemblance to present-day Polish). Behold The Protong, first published by Bray in 1980, was the first book in 50 years to bring Szukalski's work to the light of the American public. It is a modest selection from the thousands of drawings in the Zermatism oeuvre. The Work of Szukalski (Covici-McGee, 1923) and Projects in Design (University of Chicago Press, 1929) showed the young Szukalski's strength as artist-sculptor. This book combines those vitalities and steps beyond the accepted rules-for-artists in that it is divinely idiosyncratic and wholly unique.
Back to top