Climax: The History of Colorado's Molybdenum Mine (Paperback) 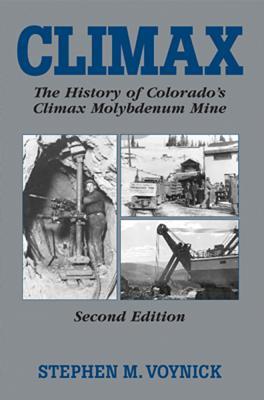 High atop the Continental Divide, the Climax Mine opened during World War I to meet military needs for molybdenum, a metallic element that enhances the toughness and durability of steel. Climax became the most successful American company of the Great Depression, even as its workers cursed the mine as �that hellhole near the sky.� During World War II, Climax single-handedly supplied the huge Allied molybdenum demand, and in the postwar years became the world�s largest underground mine. But in 1981, the molybdenum market crashed and caused devastating layoffs. For most of the next three decades, Climax remained on a care-and-maintenance status with only occasional and very limited production. But after a $750-million rebuilding program, the Climax Mine restarted in 2012 and is again a major source of the world�s molybdenum. Steve Voynick�s deft portrayal of Climax and its people, along with more than 100 rare photographs, make this updated edition of Climax: The History of Colorado�s Climax Molybdenum Mine an invaluable contribution to western mining lore.
Back to top