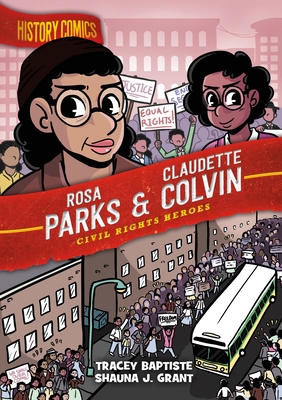 Turn back the clock with History Comics! In this volume, learn about two brave women who stood up against segregation, setting in motion the Montgomery Bus Boycott!

A Black woman who refused to give up her seat on a segregated bus sparked a bus boycott and became part of one of the most iconic moments in American history. Yet, few know that Rosa Parks had actively worked toward social justice her whole life. And even fewer know that the seeds of the statewide bus boycott were first planted by a teenager named Claudette Colvin, who was arrested on similar charges months earlier. Rosa Parks and Claudette Colvin inspired a nation, showing how positive change can start with a single defiant act. Their actions have become the stuff of legend, but there is so much more to their lives, their stories, and the movement they began.

Tracey Baptiste is a New York Times–bestselling author best known for the popular Jumbies series, including The Jumbies, Rise of the Jumbies, and The Jumbie God’s Revenge. She is also the author of the picture book Looking for a Jumbie and the middle grade nonfiction African Icons: Ten People Who Shaped History.

Shauna J. Grant is a cartoonist who creates cuteness. Her work has appeared in Black Comix Returns and Noisemakers by Kazoo magazine. She’s the creator of the early readers graphic novel Mimi and the Cutie Catastrophe and the illustrator of History Comics: Rosa Parks and Claudette Colvin.


"The full-color, cartoon-style illustrations will[...]draw in readers of all ages to this raw look at history."—School Library Journal