The Husbands: A Novel (Hardcover) 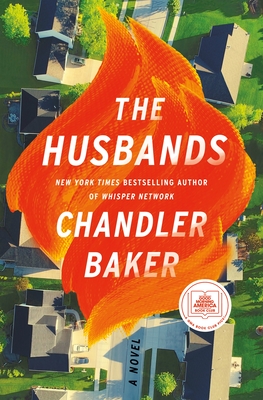 A GOOD MORNING AMERICA BOOK CLUB PICK
“Chandler Baker, queen of the feminist thriller, has delivered once again! The Husbands is a poignant exploration of what it would take for women to have it all." —Sally Hepworth, bestselling author of The Good Sister

To what lengths will a woman go for a little more help from her husband?
Nora Spangler is a successful attorney but when it comes to domestic life, she packs the lunches, schedules the doctor appointments, knows where the extra paper towel rolls are, and designs and orders the holiday cards. Her husband works hard, too… but why does it seem like she is always working so much harder?

When the Spanglers go house hunting in Dynasty Ranch, an exclusive suburban neighborhood, Nora meets a group of high-powered women—a tech CEO, a neurosurgeon, an award-winning therapist, a bestselling author—with enviably supportive husbands. When she agrees to help with a resident’s wrongful death case, she is pulled into the lives of the women there. She finds the air is different in Dynasty Ranch. The women aren’t hanging on by a thread.

But as the case unravels, Nora uncovers a plot that may explain the secret to having-it-all. One that’s worth killing for. Calling to mind a Stepford Wives gender-swap, New York Times bestselling author of Whisper Network Chandler Baker's The Husbands imagines a world where the burden of the “second shift” is equally shared—and what it may take to get there.

“Utterly engrossing and thoroughly timely, The Husbands is both a gripping, well-crafted mystery and an insightful critique of motherhood and marriage in the modern age--working mothers everywhere will feel seen in the best possible way.”
—Kimberly McCreight, New York Times bestselling author of A Good Marriage

Chandler Baker grew up in Florida, went to college in Pennsylvania, and studied law in Texas, where she now lives with her family and an ever-growing pile of books. Although she loves spinning tales with a touch of horror, she is a much bigger scaredy-cat than her stories would lead you to believe. In addition to the High School Horror series, Chandler is the author of the young adult novel, Alive.

Chandler Baker lives in Austin with her husband and toddler where she also works as a corporate attorney. She is the author of five young adult novels. Whisper Network is her adult debut.

“A gender-swapped version of The Stepford Wives — and to add further enticement, it's set to become a film starring Kristen Wiig.”
—Entertainment Weekly

“Chandler Baker, queen of the feminist thriller, has delivered once again! The Husbands is a poignant exploration of what it would take for women to have it all ... and it’s as sobering as you might imagine. My head is still spinning. I can already hear the book club discussions!”
—Sally Hepworth, New York Times bestselling author of The Good Sister

"A fun, fast-paced book...Because something needs to change, drastically, if women are expected to continue combining careers with raising families.”
—Washington Post

“[A] page-turner…An unsettling portrait of marriage, motherhood and love.”
—TIME

“[A] delightful and furious take on Stepford Wives.”
—CrimeReads

“The book reads like a direct descendant of Ira Levin’s 1972 feminist classic, The Stepford Wives...Baker insists that, while a sexist society may be the culprit behind mothers’ distress, it makes villains of us all…I found myself holding my breath.”
—The New York Times Book Review

“Utterly engrossing and thoroughly timely, The Husbands is both a gripping, well-crafted mystery and an insightful critique of motherhood and marriage in the modern age--working mothers everywhere will feel seen in the best possible way.” —Kimberly McCreight, New York Times bestselling author of Reconstructing Amelia and A Good Marriage

“A modern thriller for an era when women are told they can have it all, but societal expectations still make that nearly impossible. It’s wickedly funny, but also dead serious in its piercing social commentary.”
—Texas Monthly

“A dark and hilarious tale you don’t want to miss.”
—BookRiot

“Leave it to Baker to deliver yet another pulse-racing thriller…a modern exploration of motherhood, marriage and the myth of having it all.”
—E!

“This fast-paced read will make you think twice before asking your dear beloved to take out the trash.”
—GMA.com

“This gender-swapping Stepford Wives story is as creepy as it is delicious.”
—Good Housekeeping

“A fascinating thriller about the lengths women will go to get the support they deserve.”
—Bitch Magazine

“Baker uses Nora's relatable sense of being overwhelmed to stoke suspense in this dark exploration of modern family dynamics. A prime choice for book groups.”
—Booklist

“The Husbands is a howl of feminist rage but also one that is pure fun.”
—Stylist UK