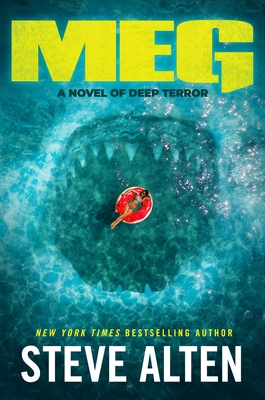 This is book number 1 in the MEG series.

Seven years ago and seven miles below the surface of the Pacific Ocean, Dr. Jonas Taylor encountered something that changed the course of his life. Once a Navy deep-sea submersible pilot, now a marine paleontologist, Taylor is convinced that a remnant population of Carcharodon megalodon—prehistoric sharks growing up to 70 feet long, that subsisted on whales—lurks at the bottom of the Mariana Trench.

Offered the opportunity to return to those crushing depths in search of the Megs, Taylor leaps at the chance...but his quest for scientific knowledge (and personal vindication) becomes a desperate fight for survival, when the most vicious predator the earth has ever known is freed to once again hunt the surface.

Steve Alten is the best-selling author of the MEG series - which was the basis for the feature film The Meg, starring Jason Statham - The Domain Trilogy, and standalone supernatural thrillers such as The Omega Project and Goliath. A native of Philadelphia, he earned a Bachelor’s degree from Penn State, a Masters from the University of Delaware, and a Doctorate from Temple University. He is the founder and director of Adopt-An-Author, a free nationwide teen reading program used in thousands of secondary school classrooms across the country to excite reluctant readers.

“With the storytelling sensibilities of Crichton and Cussler, Alten sure knows how to write a thriller.” —New York Times bestselling author Kevin J. Anderson

“Nobody writes weird science and believable monsters better than Steve Alten. Nobody. Be careful…this book will take a bite out of you.” —New York Times bestselling author Jonathan Maberry

“An adrenaline-pumping thriller...the perfect antidote to a sunny day at a crowded beach.” —New York Post