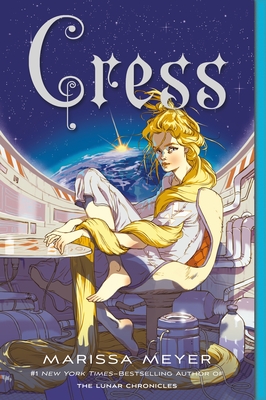 This is book number 3 in the The Lunar Chronicles series.

The third book in the #1 New York Times- and USA Today-Bestselling Lunar Chronicles series by Marissa Meyer like you’ve never seen it before, now with new cover art! The evil space queen gives an imprisoned hacker orders to track down our cyborg heroine and her team of reimagined fairytale characters. Can the Rapunzel-like hacker break free and help them instead?

"An interesting mash up of fairy tales and science fiction . . . a cross between Cinderella, Terminator, and Star Wars."—Entertainment Weekly on the Lunar Chronicles

"Prince Charming among the cyborgs." —The Wall Street Journal on the Lunar Chronicles

Cinder and Captain Thorne are fugitives on the run, with Scarlet and Wolf in tow. Together they're plotting to overthrow Queen Levana and her army.

Their best hope lies with Cress, who has been trapped on a satellite since childhood with only her netscreens as company. All that screen time has made Cress an excellent hacker; unfortunately, she's just received orders from Levana to track down Cinder and her handsome accomplice.

When a daring rescue goes awry, the group is separated. Cress finally has her freedom, but it comes at a high price. Meanwhile, Queen Levana will let nothing stop her marriage to Emperor Kai. Cress, Scarlet, and Cinder may not have signed up to save the world, but they may be the only ones who can.

Find out what happens in another richly imagined adventure in Marissa Meyer's world of fairytale (with characters based off of Cinderella, Little Red Riding Hood and Rapunzel), science fiction, and intergalactic intrigue.

Marissa Meyer is the #1 New York Times–bestselling author of the Renegades Trilogy, The Lunar Chronicles series, the Wires and Nerve graphic novels, and The Lunar Chronicles Coloring Book. Her first standalone novel, Heartless, was also a #1 New York Times bestseller. Marissa created and hosts a podcast called The Happy Writer. She lives in Tacoma, Washington, with her husband and their two daughters.

Praise for the Lunar Chronicles:

"An interesting mash up of fairy tales and science fiction . . . a cross between Cinderella, Terminator, and Star Wars." —Entertainment Weekly

"Prince Charming among the cyborgs." —The Wall Street Journal

"Takes the classic to a whole new level." —NPR

“Meyer continues to show off her storytelling prowess, keeping readers engaged in a wide cast of characters while unfolding a layered plot that involves warring governments and a fast-spreading plague.” —Publishers Weekly, starred review for Cress

“Once again, Meyer offers up a science fiction fantasy page-turner that salutes women's intelligence and empowerment. . . . Old and new romances, unfinished story lines, and the prognostication of wartime horrors . . . .” —Booklist on Cress