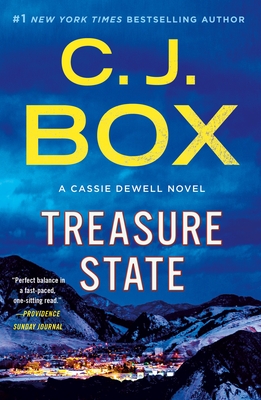 This is book number 6 in the Cassie Dewell Novels series.

Private Investigator Cassie Dewell’s business is thriving, and her latest case puts her on the hunt for a slippery con man who’s disappeared somewhere in the “treasure state”. A wealthy Florida widow has accused him of absconding with her fortune, and wants Cassie to find him and get it back. The trail takes Cassie to Anaconda, Montana, a quirky former copper mining town that’s the perfect place to reinvent yourself. As the case develops, Cassie begins to wonder if her client is telling her everything.

On top of that, Cassie is also working what's easily one of her strangest assignments ever. A poem that promises buried treasure to one lucky adventurer has led to a cutthroat competition and five deaths among treasure-hunters. But Cassie’s client doesn’t want the treasure. Instead, he claims to be the one who hid the gold and wrote the poem. And he’s hired Cassie to try to find him. Between the two cases, Cassie has her hands full.

In Montana, a killer view can mean more than just the scenery, and Cassie knows much darker things hide behind the picturesque landscape of Big Sky Country. Treasure State, C. J. Box's highly anticipated follow-up to The Bitterroots, is full of more twists and turns than the switchbacks through the Anaconda Range.

“[Box] does a fine job of developing his characters.” —Associated Press

“A complex and compelling double mystery that treats readers to a thrilling read.” —Durango Herald

"A nifty puzzler with an engrossing, briskly unfolding plot and potential consequences all around." —St. Louis Post Dispatch

“Talk about an embarrassment of riches. . . a fast-paced, one-sitting read. The perfect book to crown your summer reading list.” —Providence Sunday Journal

“All this and Montana, too. Talk about treasure." —Kirkus Reviews

“Excellent. . . Box has rarely been better in his plotting. . . The story culminates with one of Box’s most satisfying payoffs.” —Publishers Weekly (starred review)

“[A] fast-paced mystery that pits betrayal, anger, and hate against hope and longing as it examines the lasting effect of a community used and abandoned after making a fortune for the titans of the copper mining industry.” —Library Journal

“If Box isn’t already on your list, put him there.”—USA Today

“Box seems to get better with every book.” —Associated Press

“[Box has] crafted fascinating characters and put them in riveting, challenging circumstances that test their mettle and threaten their worlds.” — The Durango Herald

“One of America’s finest mystery authors.” —The Globe and Mail