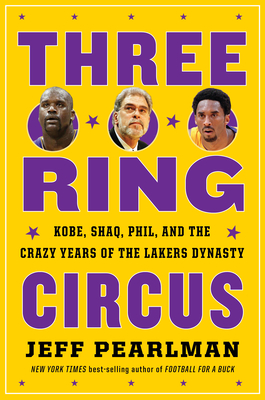 The story of the Lakers dynasty from 1996 through 2004, when Kobe Bryant and Shaquille O’Neal combined—and collided—to help bring the Lakers three straight championships and restore the franchise as a powerhouse

In the history of modern sport, there have never been two high-level teammates who loathed each other the way Shaquille O’Neal loathed Kobe Bryant, and Kobe Bryant loathed Shaquille O’Neal. From public sniping and sparring, to physical altercations and the repeated threats of trade, it was warfare. And yet, despite eight years of infighting and hostility, by turns mediated and encouraged by coach Phil Jackson, the Shaq-Kobe duo resulted in one of the greatest dynasties in NBA history. Together, the two led the Lakers to three straight championships and returned glory and excitement to Los Angeles.

In the tradition of Jeff Pearlman’s bestsellers Showtime, Boys Will Be Boys, and The Bad Guys Won, Three-Ring Circus is a rollicking deep dive into one of sports’ most fraught yet successful pairings.

JEFF PEARLMAN is the New York Times best-selling author of eight books, including Football for a Buck,The Bad Guys Won!, Boys Will Be Boys, Showtime, Sweetness, and Gunslinger. He lives in Southern California with his wife, Catherine, and children, Casey and Emmett. He is the host of the Two Writers Slinging Yang podcast and blogs regularly at jeffpearlman.com.

“Exhaustively reported and eminently readable . . . Three-Ring Circus is a valuable addition to the Kobe Bryant canon—deeply reported and unflinchingly honest. By documenting Bryant’s youthful immaturity and harmful actions, Pearlman offers a fuller picture of a beloved but complicated man.”—Time   “Pearlman [is] an amazing journalist with an eye for the revealing detail . . . NBA fans will absolutely devour this book.”—Booklist, starred review   “Pearlman excites with this enjoyable, exhaustively reported, and unsparing portrait of the early 2000s Los Angeles Lakers . . . Pearlman’s ability to uncover juicy anecdotes . . . illuminates how egos and immaturity were the Lakers’ fatal opponents. This will be a three-pointer for hoops fans.”—Publishers Weekly, starred review   “​A must-read for all basketball fans, especially considering Bryant's tragic death in January 2020.”—Library Journal, starred review   “Everything you wanted to know about the Los Angeles Lakers in the Kobe and Shaq days . . . More nuanced than the homages following [Bryant’s] tragic death earlier this year . . . [Pearlman] deftly illuminates the many dramatic twists and turns of a unique team . . . Easy reading that will appeal to all fans—and likely raise the ire of a few apologists.”—Kirkus Reviews   “Three Ring Circus is a sports-writing classic, reminding us all that greatness can be ugly up close. The book shines in its portrayal of a young Kobe Bryant, as Pearlman pulls back the layers of the polarizing figure to show what it is to ache to be great: the isolation, the loneliness, the super-human drive that such greatness requires, before time, circumstance and age allowed him to evolve.”—Mirin Fader, Bleacher Report “It stuns me as a writer that somebody could find so many voices and so much detail for such a recollection. It must have been Jeff Pearlman who wrote this.”—Chuck Culpepper, Washington Post  “Behind-the-scenes dives into teams never get old, and Jeff Pearlman offers just that into one of the most captivating dynasties. This is a hardcore, uncensored reveal of the enormous egos powering those fascinating and controversial Lakers.”—Marcus Thompson, bestselling author of Golden: The Miraculous Rise of Steph Curry    —