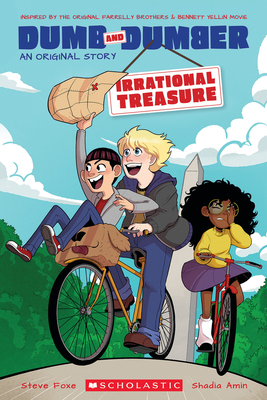 Go on an epic adventure with Harry and Lloyd - the stars of the hit Dumb & Dumber franchise - as middle school students, in this hilarious illustrated novel!

Despite their exhausted history teacher’s best efforts to get them excluded, middle-schoolers Harry Dunne and Lloyd Christmas join their classmates on a special weekend-long trip to America’s capital, Washington, D.C. Shortly after arriving, the boys wander off the guided path at the Museum of American History, where they find a very suspicious-looking security guard seemingly breaking into one of the cases. This doesn’t ring any mental alarm bells for Harry and Lloyd, who are instead excited and fascinated by the case’s contents, even as the security guard tries to hush them up.

Unfortunately, Harry and Lloyd end up setting off the actual alarm bells, and the “security guard” makes a break for it -- but not before dropping a coded map that has certain locations around Washington, D.C. marked with strange symbols. The boys have just one thought: SCAVENGER HUNT! Soon, Harry and Lloyd (and their exasperated classmate Tini) embark on a romp through Washington DC to find everything on this “scavenger hunt,” all while being trailed by the thief who is after the REAL treasure the map leads to.

Part Nicholas Cage heist of the Declaration of Independence, part hilarious middle grade adventure, “Irrational Treasure” is sure to be a hit of fans of Dumb & Dumber and kids who are new to the franchise alike!

Shadia Amin is a Colombian comics artist currently living in the US. Her art aims to capture the fun of super heroes, fantasy, and life itself. Her works include BOOM!’s The Amazing World of Gumball: The Storm, and Oni-Lion Forge’s Aggretsuko, as well as collaborations on anthologies like Alloy from Ascend Comics and Votes for Women from Little Bird Press.

Steve Foxe is the author of more than fifty comics and children's books for properties including Pokémon, Batman, Transformers, Adventure Time, Steven Universe, and Grumpy Cat. He lives in Queens with his partner and their dog, who is named after a cartoon character. Find out more at stevefoxe.com.