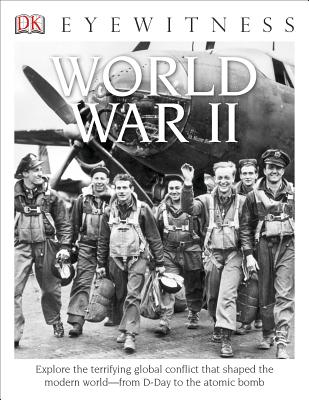 The global conflict of World War II changed the world forever. In collaboration with the Imperial War Museum, this engaging and educational book gives children a revealing account of all aspects of war.

Starting from a world divided in the early 20th century, you’ll explore international alliances and find out why tensions were growing between nations. With the world on the brink of war, you’ll meet the key players who influenced the outcome. Take a closer look at major events, including the attack on Pearl Harbor, Battle of Britain, D-Day invasion, and atomic bombs in Japan. Discover how clever code breakers developed new technology to decipher hidden messages and gain the military advantage over their enemies. Experience the turbulent times of the Blitz and see why air raid shelters became the last chance for survival.

Most importantly, you’ll learn the lessons of World War II and how they impact on you and everyone else in the world today. Fascinating full-color photographs and illustrations of warfare, weaponry, vehicles, maps, and secret documents reveal this conflict as never before. Simple, straightforward text, together with amazing facts, infographics, statistics, and timelines ensure the content is crystal clear and easy to understand.

Part of DK’s best-selling Eyewitness series, World War II puts you at the heart of the action as an important eyewitness to history. Whether you’re keen to step back in time or simply want help on a school project, this one is for you.

Simon Adams earned his degree in politics and history at the London School of Economics, and then studied as a postgraduate at Bristol University. He has written and edited more than 50 children’s books about history, archaeology, geography, and famous people, among other subjects.
Back to top