A History of Heavy Metal (Paperback) 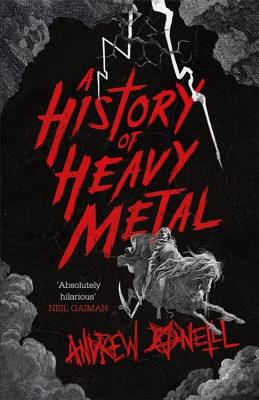 'One of the funniest musical commentators that you will ever read . . . loud and thoroughly engrossing' - Alan Moore

'A man on a righteous mission to persuade people to "lay down your souls to the gods rock and roll".' - The Sunday Times

'As funny and preposterous as this mighty music deserve' - John Higgs


The history of heavy metal brings brings us extraordinary stories of larger-than-life characters living to excess, from the household names of Ozzy Osbourne, Lemmy, Bruce Dickinson and Metallica (SIT DOWN, LARS!), to the brutal notoriety of the underground Norwegian black metal scene and the New Wave Of British Heavy Metal. It is the story of a worldwide network of rabid fans escaping everyday mundanity through music, of cut-throat corporate arseholes ripping off those fans and the bands they worship to line their pockets. The expansive pantheon of heavy metal musicians includes junkies, Satanists and murderers, born-again Christians and teetotallers, stadium-touring billionaires and toilet-circuit journeymen.

Award-winning comedian and life-long heavy metal obsessive Andrew O'Neill has performed his History of Heavy Metal comedy show to a huge range of audiences, from the teenage metalheads of Download festival to the broadsheet-reading theatre-goers of the Edinburgh Fringe. Now, in his first book, he takes us on his own very personal and hilarious journey through the history of the music, the subculture, and the characters who shaped this most misunderstood genre of music.

He has appeared on television in Saxondale, Never Mind The Buzzcocks, and 50 Years Of Rock Excess and his own award-winning BBC Radio 4 stand-up show Pharmacist Baffler. He has written for The New Statesman, Terrorizer and Time Out.

His neck is so thick from headbanging that standard shirt sizes do not fit him.

One of the funniest musical commentators that you will ever read. A History of Heavy Metal is a comprehensive, landmark analysis of an enormous area of music that has been too long without such a thing, and has the massive advantage of the funny being turned up to twelve. A loud and thoroughly engrossing love-story.—Alan Moore

Loud, unapologetic and full of love, Andrew O'Neill's essential and much-needed History of Heavy Metal is as funny and preposterous as this mighty music deserves.—John Higgs - author of The KLF: Chaos, Magic and the Band who Burned a Million Pounds

This, then, is the work of a fan first and foremost, driven by his prejudices and passions . . . a man on a righteous mission to persuade people to "lay down your souls to the gods rock and roll", as Newcastle's Venom would have it.—The Sunday Times

O'Neill's knowledge is nothing short of impressive. His chronological expedition through the ages, as seen through his own eyes, is backed up by constant witticisms and footnotes of in-jokes and opinions. He has obviously gone to great effort to leave no plectrum unturned in the pantheon of heavy metal.—TeamRock.com
Back to top