Isfahan and Its Palaces: Statecraft, Shi`ism and the Architecture of Conviviality in Early Modern Iran (Edinburgh Studies in Islamic Art) (Paperback) 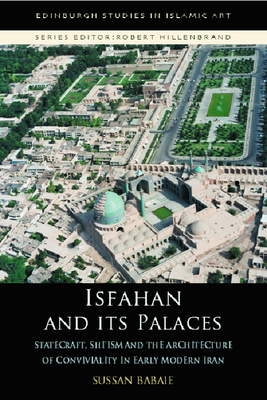 This beautifully illustrated history of Safavid Isfahan (1501-1722) explores the architectural and urban forms and networks of socio-cultural action that reflected a distinctly early-modern and Perso-Shi'i practice of kingship.
An immense building campaign, initiated in 1590-91 at the millennial threshold of the Islamic calendar (1000 A.H.), transformed Isfahan from a provincial, medieval, and largely Sunni city into an urban-centered representation of the first Imami Shi'i empire in the history of Islam. The historical process of Shi'ification of Safavid Iran and the deployment of the arts in situating the shifts in the politico-religious agenda of the imperial household informs Sussan Babaie's study of palatial architecture and urban environments of Isfahan and the earlier capitals of Tabriz and Qazvin.
Babaie argues that since the Safavid claim presumed the inheritance both of the charisma of the Shi'i Imams and of the aura of royal splendor integral to ancient Persian notions of kingship, a ceremonial regime was gradually devised in which access and proximity to the shah assumed the contours of an institutionalized form of feasting. Talar-palaces, a new typology in Islamic palatial designs, and the urban-spatial articulation of access and proximity are the architectural anchors of this argument. Cast in the comparative light of urban spaces and palace complexes elsewhere and earlier-in the Timurid, Ottoman, and Mughal realms as well as in the early modern European capitals-Safavid Isfahan emerges as the epitome of a new architectural-urban paradigm in the early modern age.

Sussan Babaie is currently teaching at The Courtauld Institute of Art in London, where her research focuses on imperialism and artistic patronage in Persianate West, Central and South Asia where high culture derived from the literary corpus of the Persian language. She has previously taught in the Department of the History of Art at the University of Michigan, Smith College, and New York University. Sussan is co-author of Slaves of the Shah: New Elites of Safavid Iran (2004) and Persian Drawings in the Metropolitan Museum of Art (1989).
Back to top