A Fashionable Fatality (A Lady and Lady's Maid Mystery #8) (Hardcover) 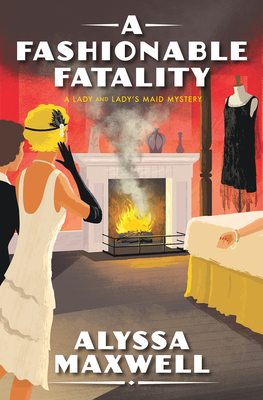 Amid the aftermath of the Great War and its hardships, it’s no wonder that many wish to rediscover life’s pleasures—parties, fashion, dancing. Still, Lady Phoebe and Eva are disconcerted when a small gathering at the home of Phoebe’s sister, Julia, becomes a far larger and more glamorous affair . . . Julia has invited her favorite French fashion designer, Gabrielle “Coco” Chanel, and Coco’s current beau, the Earl of Chesterhaven. Coco has brought an entourage of her own, including two models, and intends to use the gardens as a photographic setting for her latest creations. Madame Chanel is as outspoken as she is talented, offering a scathing critique of Phoebe’s fashion sense. There is tense competition between the models as well. When one of the guests is found dead of smoke inhalation, it appears to be a tragic accident. But was a footman really to blame for mistakenly closing the fireplace flue, or is there a more sinister explanation? Phoebe is determined to find out, despite the protestations of her sweetheart, Owen Seabright.  Both above and below stairs, Phoebe and Eva uncover myriad motives—career ambition, romantic rivalries, and even deeper betrayals. For despite the surface beauty, there are ugly secrets in the world of Maison Chanel, ones that a killer will risk anything to protect. “Agatha Christie meets Downton Abbey…exemplary.” —Publishers Weekly on A Deadly Endowment

Alyssa Maxwell is the acclaimed author of the Gilded Newport Mysteries and the Lady and Lady’s Maid Mystery series. She knew from a young age that she wanted to write novels. Growing up in New England and traveling to Great Britain fueled a passion for history, while a love of puzzles of all kinds drew her to the mystery genre. She and her husband reside in Florida, where she loves to watch BBC productions, sip tea in the afternoons, and delve into the past. You can learn more about Alyssa and her books at AlyssaMaxwell.com.

“Maxwell brings the era’s class and gender constraints to life in this intelligent historical.” —Publishers Weekly on A Sinister Service

“A revealing look at the pottery business melds nicely with a classic 1920s-style mystery.” —Kirkus Reviews on A Sinister Service

“Excellent...with lots to be learned about the bone-china industry, and a murderer who remains elusive until the final pages.” —Historical Novels Review on A Sinister Service

“Agatha Christie meets Downton Abbey in Maxwell’s pleasantly diverting seventh Lady and Lady’s Maid Mystery. . . . Maxwell brings it all to the table: colorful characters, a charming Cotswold setting, lots of suspects, a dismissive chief inspector and his kind subordinate, plucky ladies who are smarter than the police, a hidden treasure, and a hint of romance. This is an exemplary cozy.” —Publishers Weekly on A Deadly Endowment

“Beneath all the red herrings is an appealingly perceptive look at England between the wars.” – Kirkus Reviews on A Deadly Endowment

“The forward-thinking Phoebe and the loyal Eva are a sympathetic duo, and the life and times of a small, post-WWI English village are nicely integrated into the story.” —Booklist on A Silent Stabbing

“Eva and Lady Phoebe provide smart sleuthing and insight into the upstairs and downstairs worlds. Fans of traditional English mysteries will be rewarded.” —Publishers Weekly on A Silent Stabbing

“A stylish post-World War I mystery with plenty of twists and strong female characters fully capable of negotiating them.”—Kirkus Reviews on A Silent Stabbing

“This will delight Maxwell’s readers as well as all who love a good cozy. And since they appear in the plot—tea and scones, anyone?”  —Historical Novel Society on A Silent Stabbing

“A Silent Stabbing brings the pastoral world of maid and mistress to vibrant life, with an elegantly elegiac tone to the narrative.”  —Criminal Element

“Thanks to the considerable talents of Alyssa Maxwell, readers can ‘visit’ the delights and perils of life in a small English village in post- World War I England.” —Murder on the Beach Mystery Bookstore on A Silent Stabbing

"The action unfolds smoothly until well-disguised clues lead to a clever and satisfying denouement. Downton Abbey fans will have fun." —Publishers Weekly on A Murderous Marriage

"A well-crafted historical mystery which will delight devotees of television shows such as Downton Abbey." —Suspense Magazine on A Murderous Marriage

"Maxwell, who always puts an interesting spin on her country-house mysteries set between the great wars, delivers once again in this tale of love, hate, revenge, and country houses in peril." —Kirkus Reviews on A Murderous Marriage

"The real murderer doesn’t stand a chance in face of this indomitable, experienced pair of detectives. ‘Circumstances call for logic and cool heads,’ and that’s exactly what they bring." —Criminal Element on A Murderous Marriage

“Well-crafted…Maxwell artfully portrays the personal dynamics of English society at the time, and readers will hope to see more of the endearing Phoebe and Eva.” —Publishers Weekly on A Devious Death

“Colorful information on the postwar period is combined with plenty of suspects, all neatly wrapped up in the style of a classic mystery.”—Kirkus Reviews on A Pinch of Poison

“A sweet, delightful mystery, which is sure to appeal to historical-fiction and mystery readers alike.” —Foreword Reviews on A Pinch of Poison

“Along with a bracing mystery, Maxwell explores compelling themes. Although this is from a slightly earlier time period, it’s a good match with Rhys Bowen’s Her Royal Spyness series.” —Booklist on A Pinch of Poison