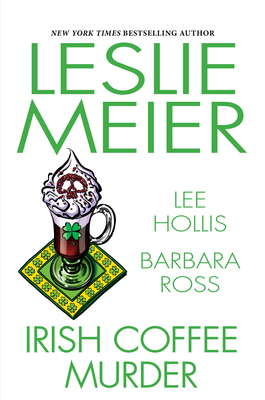 You don’t need to be Irish to enjoy St. Patrick’s Day in Maine, where the chilly March weather offers the perfect excuse to curl up with an Irish coffee…But in these St. Patty’s-themed novellas by fan-favorite cozy mystery authors Leslie Meier, Lee Hollis, and Barbara Ross, someone may have spiked this year’s brew with murder!

IRISH COFFEE MURDER by LESLIE MEIERPart-time reporter Lucy Stone is writing a piece for the Courier about four Irish step dancing students from Tinker’s Cove on the cusp of making it big. But the story becomes headline news for all the wrong reasons when one girl’s mother is found dead in her bathtub. Did a stage mom take rivalry too far, or is some other motive at play? DEATH OF AN IRISH COFFEE DRINKER by LEE HOLLISAs owner of Bar Harbor’s hottest new restaurant, Hayley Powell offers to cater the after-party for popular comedian Jefferson O’Keefe, who’s playing his old hometown for St. Patrick’s Day. But it’s no laughing matter when Jefferson keels over after gulping down his post-show Irish coffee, leaving Hayley to figure out who decided this joker had gone too far . . . PERKED UP by BARBARA ROSSIt’s a snowy St. Patrick’s Day in Busman’s Harbor. But when the power goes out, what better way for Julia Snowden to spend the evening than sharing local ghost stories—and Irish coffees—with friends and family? By the time the lights come back, they might even have solved the coldest case in town . . .

LESLIE MEIER is the acclaimed author of over twenty-five Lucy Stone Mysteries. She has also written for Ellery Queen’s Mystery Magazine, and like her series protagonist, Lucy Stone, she worked as a New England newspaper reporter while raising her three children. She is currently at work on the next Lucy Stone mystery and can be found online at LeslieMeierBooks.com.

LEE HOLLIS, the pen name for Rick Copp, is the author of the Desert Flowers Mysteries and the Maya and Sandra Mystery Series. He is also the co-author of the Hayley Powell Food & Cocktail Mysteries with his sister, Holly Simason. A veteran Hollywood screenwriter, he is the co-writer of The Brady Bunch Movie and has written for numerous television series, including The Golden Girls, Wings,Scooby-Doo, Teen Titans, and Barbershop. He also produces, writes, and stars in the hit web series Where the Bears Are. He lives in Palm Springs, California and can be found online at LeeHollisMysteries.com.

BARBARA ROSS is the author of the Maine Clambake Mysteries and the Jane Darrowfield Mysteries. Her books have been nominated for multiple Agatha Awards for Best Contemporary Novel and have won the Maine Literary Award for Crime Fiction. Barbara’s Maine Clambake novellas are included along with stories by Leslie Meier and Lee Hollis in holiday anthologies from Kensington Publishing. Barbara and her husband live in Portland, Maine. Readers can visit her website at BarbaraRossAuthor.com.

“Haunted houses, a holiday staple, are an especially good fit for the authors’ folksy Down East setting…All three tales offer a dash of detection, but their strong suit is hometown charm.” —Kirkus Reviews on Halloween Party Murder

“This fun whodunit kept me entertained!” —First for Women on Halloween Party Murder

“These Maine stories are lots of fun and unlikely to deter anyone from renting a place on the coast for a quiet getaway.” —Seacoast Online on Halloween Party Murder

“There is plenty of cozy mystery fun in this Halloween-themed set of stories that will be a good introduction to new readers of the authors.” —Parkersburg News & Sentinel on Halloween Party Murder

“Kick back with something sweet and indulge in three bite-sized Yuletide tales too good to resist!” —Suspense Magazine on Yule Log Murder

“A hearty collection that should satisfy readers who crave a little something sweet with a pinch of sinister.” —Criminal Element on Yule Log Murder

“This collection of short cozy mysteries set in Maine and featuring delicious recipes serves as a great introduction to these authors’ series for new readers or a bite-sized delicacy to tide established fans over until the next book.” —Library Journal on Eggnog Murder