The Finest Hours: The True Story of the U.S. Coast Guard's Most Daring Sea Rescue (Paperback) 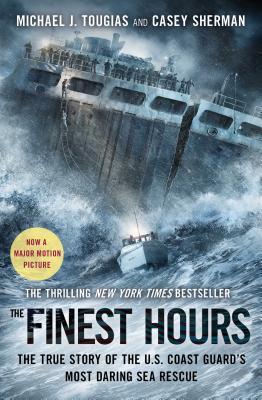 The story behind the major motion picture from Disney—starring Chris Pine, Eric Bana, and Casey Affleck—written by a recognized master of the genre—“a blockbuster account of tragedy at sea” (The Providence Journal).

It’s the winter of 1952 and a ferocious Nor’easter is pounding New England with howling winds and seventy-foot seas. Two oil tankers get caught in the violent storm off Cape Cod, its fury splitting the massive ships in two. Back on shore are four young Coast Guardsmen who are given a suicide mission. They must save the lives of the seamen left stranded in the killer storm, and they have to do it in a tiny lifeboat. The crew is led by Bernie Webber, who has to rely on prayer and the courage of his three crewmembers to pull off the impossible. As Webber and his crew sail into the teeth of the storm, each man comes to the realization that he may not come back alive. They’ve lost all navigation and have no idea where the stranded seaman are, and have no idea how to get back home. Whether by sheer luck or divine intervention, the crew stumbles upon the wounded ship in the darkness. More than thirty men appear at the railings of the SS Pendleton, all hoping to be saved. Once again, Webber and his crew face a daunting challenge. How can they rescue all these men with their tiny lifeboat?

Dripping with suspense and high-stakes human drama, The Finest Hours has incredible and astonishing true-to-life heroism and action-packed rescue scenes. This “marvelous and terrifying yarn” (Los Angeles Times) “deserves a place as a classic of survival at sea” (The Boston Globe).

Michael J. Tougias is the author of a number of books, including Rescue of the Bounty: Disaster and Survival in Superstorm Sandy; Overboard!; The Finest Hours (with Casey Sherman), the basis of the major motion picture released in 2016; Fatal Forecast; and Ten Hours Until Dawn: The True Story of Heroism and Tragedy Aboard the Can Do. He is a sought-after lecturer who gives more than seventy presentations each year. He lives in Massachusetts.

Casey Sherman is an acclaimed journalist and author of ten books, including 12: The Inside Story of Tom Brady’s Fight for Redemption, a New York Times bestseller and CBS Films’s Patriots Day. A graduate of Boston University, he is also a contributing writer for Esquire, Time, The Washington Post, and Boston Magazine. He is a much sought-after national speaker. He lives in Massachusetts.

"The Finest Hours is a touching account, a sensitive rendering of what might be called four indescribably chaotic conditions...Tougias and Sherman never sensationalize, never go beyond the facts, and yet capture all the pain, physical and emotional, of the survivors and their families."
— Providence Journal

"This book captures the wit, grit and sacrifice of Coasties and their boats."
— Minneapolis Star Tribune

"Tougias and Sherman reach their peak of tension in the sink-or-swim moments when mariners abandoned ship and chanced their lives on their rescuers' skill and bravery...excellent."
— Booklist

"It's good to know that real heroes exist...incredible."
— Concord Monitor

"Gripping...Tougias and Sherman ably narrate the desperate struggles of crew members on both the wrecks and the rescue boats...will make readers appreciate the bravery of the men who put their lives on the line...action-packed."
— Publishers Weekly

"Look no further for the real-life adventure of the year. The Finest Hours is a rousing page-turner, a fascinating history, and an inspiring ode to the courage and professionalism of men who face bitter winds and black mountainous seas...all to do a dangerous job. Put it on the shelf next to The Perfect Storm. That's where it belongs!"
— William Martin, New York Times Best Selling author of Cape Cod and The Lost Constitution

"Tougias and Sherman have told a mesmerizing story about Coast Guardsmen under the stress of extreme conditions and the self-imposed pressure to perform. The events they describe so vividly occurred in 1952. As extraordinary as the collective performance by the boat crews, cutter crews and aircraft crews were that night, the real miracle is that such performances are timeless."
— James Loy, former Commandant of the United States Coast Guard

"In February of 1952, eighty-four men were in danger of drowning off the coast of Cape Cod when a ferocious Nor'easter split their ships in two. The Finest Hours recounts the incredible heroism of the Coast Guard, who risked their lives to save others. A gripping read."
— James Bradley, author of Flags of Our Fathers and Flyboys