Princess of the Wild Sea (Hardcover) 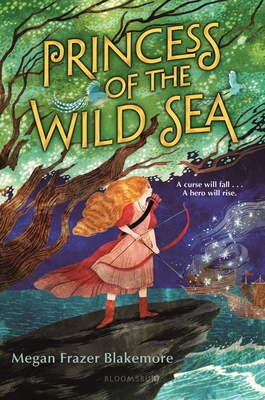 Princess Harbor Rose is cursed. She's lived her whole life hidden away on a remote island with her magical aunts, following all the rules for being a princess. Now it is only one more year until thirteenth birthday, when a hero will finally arrive to save her from her curse.

But as with any story, there are two sides . . . and the curse told of much more than a single princess's uncertain fate. It told of a dangerous foe rooted in powerful magic. It told of a terrible war that could destroy everything if a young hero didn't arrive in time. It told of a magic imbued with hope that could save everyone, but only if they believe.

With her beloved kingdom and island at grave risk, Harbor Rose has a choice: Should she wait for the hero, or take matters into her own hands?

Megan Frazer Blakemore is the author of The Story Web, The Daybreak Bond, The Firefly Code, The Friendship Riddle, The Spy Catchers of Maple Hill, and The Water Castle, which was a Kirkus Reviews Best Book of the Year, a Bank Street Best Book of the Year, and a New York Public Library Best Book for Reading and Sharing. She is also the author of the young adult novels Good and Gone and Very in Pieces, as well as the Frankie Sparks, Third-Grade Inventor chapter book series. A former school librarian, Megan lives in Maine with her family.
www.meganfrazerblakemore.com

“An absorbing fantasy adventure with well-developed characters and more than a touch of magic.” —Booklist, starred review

“Familiar fairy tales serve as the foundation for this intriguing volume, which Blakemore imbues with refreshing wildness and originality, resulting in a continually surprising adventure.” —Publishers Weekly, starred review

“Blakemore blends the fantastic and the mysterious into a fast-paced narrative that still leaves room for the characters to breathe and to wonder. . . . An imaginative adventure both familiar and new.” —Kirkus Reviews, starred review

“A clever adventure story recommended for readers who enjoy a twist on classic fantasies and the authors previous books.” —School Library Journal

“This retelling of Sleeping Beauty introduces new twists to the traditional tale. . . . Themes of good versus evil, heroism, courage, bravery, and love of family and home are cleverly sewn into the fabric of the plot.” —School Library Connection