How the Garcia Girls Lost Their Accents (Paperback) 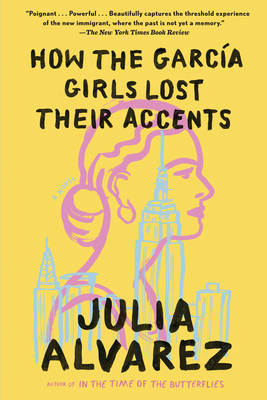 "Poignant . . . Powerful . . . Beautifully captures the threshold experience of the new immigrant, where the past is not yet a memory." —The New York Times Book Review

Acclaimed writer Julia Alvarez’s beloved first novel gives voice to four sisters as they grow up in two cultures. The García sisters—Carla, Sandra, Yolanda, and Sofía—and their family must flee their home in the Dominican Republic after their father’s role in an attempt to overthrow brutal dictator Rafael Trujillo is discovered. They arrive in New York City in 1960 to a life far removed from their existence in the Caribbean. In the wondrous but not always welcoming U.S.A., their parents try to hold on to their old ways as the girls try find new lives: by straightening their hair and wearing American fashions, and by forgetting their Spanish. For them, it is at once liberating and excruciating to be caught between the old world and the new. Here they tell their stories about being at home—and not at home—in America.

Julia Alvarez left the Dominican Republic for the United States in 1960 at the age of ten. She is the author of six novels, three books of nonfiction, three collections of poetry, and eleven books for children and young adults. She has taught and mentored writers in schools and communities across America and, until her retirement in 2016, was a writer in residence at Middlebury College. Her work has garnered wide recognition, including a Latina Leader Award in Literature from the Congressional Hispanic Caucus Institute, the Hispanic Heritage Award in Literature, the Woman of the Year by Latina magazine, and inclusion in the New York Public Library’s program “The Hand of the Poet: Original Manuscripts by 100 Masters, from John Donne to Julia Alvarez.” In the Time of the Butterflies, with over one million copies in print, was selected by the National Endowment for the Arts for its national Big Read program, and in 2013 President Obama awarded Alvarez the National Medal of Arts in recognition of her extraordinary storytelling.

"A clear-eyed look at the insecurity and yearning for a sense of belonging that are a part of the immigrant experience . . . Movingly told." —The Washington Post Book World

"Extraordinary . . . The voice of personal and political history as it lives now." —The Bloomsbury Review

"[A] tender, charming book . . . There is a charge to Alvarez's writing, a poetic intensity, that is truly original." —The Miami Herald

"Subtle . . Powerful . . . Reveals the intricacies of family, the impact of culture and place, and the profound power of language." —The San Diego Tribune