Letters of George Sand, Vol. I (in Three Volumes) (Paperback) 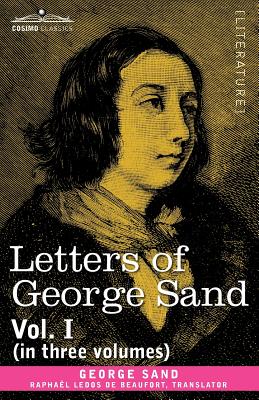 "What a brave man she was," said novelist Ivan Turgenev, "and what a good woman." French writer and feminist Amandine Aurore Lucile Dupin, Baroness Dudevant, aka GEORGE SAND (1804-1876), smoked in public and dressed like a man, carried on scandalous romantic affairs and was an intimate of Chopin and Flaubert...and wrote some of the most intriguing works of 19th-century French literature: novels, plays, autobiographies, literary criticism, and political treatises. This three-volume 1886 collection of her correspondence sheds light on her personality, morality, and ideas on religion, all of which molded the philosophies on women's sexuality and women's freedom that she is famous for today, and aids a deeper understanding of her work and her place in the history of feminism. Volume I begins with a detailed biographical sketch and features the letters of the eight-year-old Mademoiselle Aurore, the young woman she was to become, and the mature artist we remember her as. From her early literary endeavors to the secrets of her cultured society and the friendships and work she was engaged in to her early notoriety in the 1840s, which appears to have bothered her not one whit, this is a fascinating look at the shaping of a woman who would shape Western society at large.
Back to top