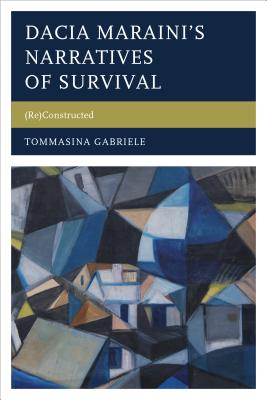 Dacia Maraini's Narratives of Survival: (Re)Constructed focuses on Dacia Maraini's narrative from about 1984 to 2004 and makes substantive use of her interviews and essays. While acknowledging the importance and ongoing validity of feminist scholarship of Maraini's work, this book seeks to take scholarship on Maraini beyond feminist readings by identifying a critical framework that cuts across gender and genre and thereby invites alternative readings. Using a method of close textual analysis, the author includes studies of men, children, animals, and imaginary characters in Maraini's narrative, analyzes language, character, motifs, and symbols, and considers some of Maraini's work in light of declining postmodern and emerging posthuman critical social theory. This critical framework identifies the paradigm of reconstruction as narrative center, both strategy and theme, of many of Maraini's works from this twenty-year-period and beyond. Reconstruction here signifies the strategies by which Maraini's deep investment in survival, which has its roots in the life threatening conditions she experienced as a small child in a WWII Japanese concentration camp, is enacted in a narrative re-building and re-constructing of personal memory, of various personal, social and political histories, of motherhood and maternal discourses, of crime stories, of postmodern fragmentation, and even of the process of erasure itself. Maraini's narrative is deeply attentive to the mechanisms that threaten survival of the body (and not just the woman's body); psychological and aesthetic survival; the survival in the Italian canon of a woman author's work, memory and legacy after her death; the survival of a drug-addicted and self-destructive younger generation; and by extension, collective and ecological survival. Never marked by nihilism or despair, Maraini's narratives offer the ethos of reconstruction as a variation on the "begin again" that marks the end of many of her novels and, as we can see in Colomba, her own aesthetic process of renewal and regeneration. This book focuses primarily on Il treno per Helsinki (1984), Isolina (1985), some of her short stories for children, La nave per Kobe: Diari giapponesi di mia madre (2001), Buio (Strega Literary Prize, 1999), and Colomba (2004).

Tommasina Gabriele is professor of Italian studies at Wheaton College in Massachusetts.
Back to top