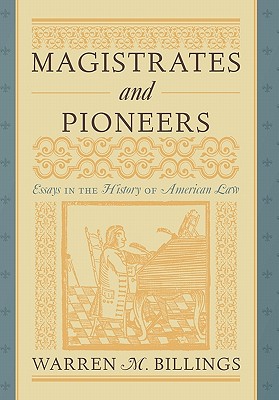 A Collection of Essays by a Leading Scholar of Early American Legal History Magistrates and Pioneers collects eighteen essays by the historian Warren M. Billings. They address the main areas of his research, nineteenth century Louisiana and seventeenth century Virginia. From Opechancanough, a seventeenth-century Indian chief to Sir William Berkeley, colonial governor of Virginia, to Edward Livingston, coauthor of Louisiana's first civil code, to the legendary Louisiana Governor and U.S. Senator Huey Long, Billings brings to life the forces behind the legal development of these two historically distinctive states. Many of these are classic essays, all are essential to students of American legal history. Warren M. Billings is Distinguished Professor of History, Emeritus, at the University of New Orleans. He is a graduate of the College of William and Mary and has a Ph.D. in early American history from Northern Illinois University. Currently, he is Visiting Professor of Law at the William and Mary Law School. Billings is the author or editor of numerous titles, including A Little Parliament: The General Assembly of Virginia in the Seventeenth Century, A Law Unto Itself?: Essays in the New Louisiana Legal History, The Papers of Sir William Berkeley, and Sir William Berkeley and the Forging of Colonial Virginia, which received the Virginia Historical Society's Richard Slatten award for excellence in Virginia biography. "Few scholars match Warren Billings for the depth and integrity of their research, or the elegance of their prose. These essays, the fruits of four decades of immersion in technically difficult archives and spanning four centuries of Virginia and Louisiana history, gracefully connect often arcane legal processes to the larger cultures in which they were situated. Even scholars well conversant with his work will benefit from having this selection of Billings' essays gathered in a single place. The lead essay, a charming and deeply humane scholarly autobiography, adds a grace-note to a volume rich in erudition and learning. Scholars of southern history especially will find much to savor in this superb collection." Kevin R. Hardwick James Madison University "Warren M. Billings, one of the leading scholars of early American legal culture, has produced a rich collection of essays drawn from his writings of the past four decades. These elegantly-written works reveal the depth and breadth of Billings' expertise in seventeenth-century Virginia legal history, The New Louisiana Legal History, and the history of the law book. This learned collection merits a place in every American legal scholar's library." Ellen Holmes Pearson University of North Carolina Asheville "For four decades Warren Billings has been one of the most productive and prolific scholars of early American history. His books, all unanimously well received, and his "vintage" articles have stamped out impressive imprints in several different areas of American history. His work on the colonial Chesapeake ranks as nothing short of seminal. Leading his graduate students at the University of New Orleans and a handful of other interested scholars, Billings almost single-handedly laid the foundation for the vital field that he helped to christen the New Louisiana Legal History. Recently, he's been able to fuse these interests into deeper, thoughtful, and expansive synthetic essays on aspects of American history from 1607 to the present. This impressive array of interests is evident in the essays in this volume." From the Foreword by Mark F. Fernandez Loyola University New Orleans.
Back to top