An Arabic-English Lexicon (in Eight Volumes), Vol. V: Derived from the Best and the Most Copious Eastern Sources (Hardcover) 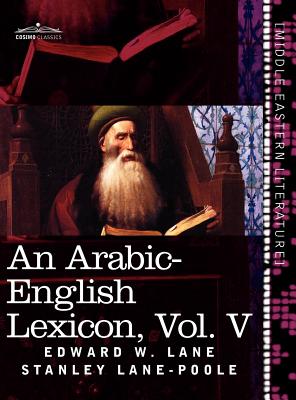 Compiled over many years in the 1800s by Edward William Lane, The Arabic-English Lexicon is a massive Arabic-English dictionary based on several medieval Arabic dictionaries, mainly the Taj al-'Arus, or "Crown of the Bride" by al-Zabidi, also written in the 19th century. The Lexicon consists only of Book I, the dictionary; Book II was to contain rare words and explanations, but Lane died before its completion. After his death, Dr. G.P. Badger described Lane's lexicon: "This marvelous work in its fullness and richness, its deep research, correctness and simplicity of arrangement far transcends the Lexicon of any language ever presented to the world." Presented here in eight volumes, this work is one of the most concise and comprehensive Arabic-English dictionaries to date. Volume V contains a Preface from the editor and a Postscript to the Preface from the author's nephew, Stanley Lane-Poole. It also continues Book I of the dictionary, which includes the fifteenth through the eighteenth letters of the Arabic alphabet, categorized by Arabic, rather than English, characters. EDWARD WILLIAM LANE (1801-1876) was a British translator, lexicographer, and Orientalist. Instead of studying at college as a young man, Lane moved to London with his brother to study engraving, at which time he also began to study Arabic. When his health began failing, he moved to Egypt for a change of atmosphere and to continue his studies. While in Egypt, Lane began to study ancient Egypt, but soon became more entranced by modern customs and society. He relied on Egyptian men to help him gather information, especially on the topic of Egyptian women, on which he wrote many books. Lane also translated One Thousand and One Nights, though his greatest work remains The Arabic-English Lexicon. Born in 1854 in London, England, STANLEY LANE-POOLE was a British historian, orientalist, and archaeologist. Lane-Poole worked in the British Museum from 1874 to 1892, thereafter researching Egyptian archaeology in Egypt. From 1897 to 1904 he was a professor of Arabic studies at Dublin University. Before his death in 1931, Lane-Poole authored dozens of books, including the first book of the Arabic-English Lexicon started by his uncle, E.W. Lane.
Back to top