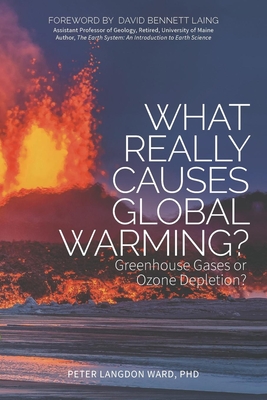 Thousands of scientists are convinced beyond any reasonable doubt that recent global warming is being caused by emissions of greenhouse gases and that we must act immediately to reduce these emissions or else we may render Earth unlivable for our children and our grandchildren. Some even say "the science is settled."

What Really Causes Global Warming examines a broad range of observations that show that greenhouse warming theory is not only misguided, but not physically possible. Recent warming was caused by ozone depletion due to emissions of human-manufactured gases. We solved that problem with the Montreal Protocol on Substances that Deplete the Ozone Layer stopping the increase in global temperatures by 1998. Volcanoes also deplete ozone. The eruption of B r arbunga volcano in central Iceland from August 2014 to February 2015--the largest effusive, basaltic, volcanic eruption since 1783--caused 2015 to be the hottest year on record. How can we adapt?

"The work of science has nothing whatever to do with consensus. Consensus is the business of politics. Science, on the contrary, requires only one investigator who happens to be right, which means that he or she has results that are verifiable by reference to the real world."-- Michael Crichton, 2003

Dr. Peter Langdon Ward spent twenty-seven years with the United States Geological Survey as a research geophysicist, branch chief, and program manager, and as a specialist in helping people adapt to the risks from natural hazards that they and their families face. He chaired a committee on disaster warning at the White House, published more than fifty scientific papers, and has been featured on Good Morning America and many regional news programs. For the past nine years, he has worked to resolve several enigmatic observations related to climate change.