Big Man and the Little Men: A Graphic Novel (Hardcover) 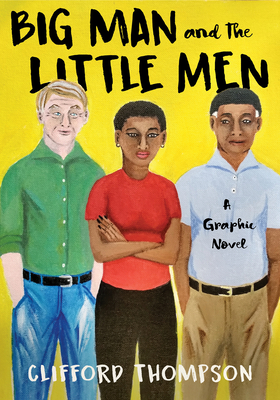 A writer navigates shady—and potentially deadly—political campaigns in this vibrant graphic novel about unconscious bias and how the cynical exploit it.

April Wells, a celebrated African-American memoirist and essayist, lands a writing assignment unlike any she has had before: covering the presidential campaign of the presumptive Democratic nominee, William Waters, for a high-profile magazine. Waters, a well-spoken progressive with lofty ideals of unity in diversity, faces the polar opposite in his Republican challenger, the anti-intellectual, narcissistic Lee Newsome, who seeks to gain power by sowing division. Ahead of the Democratic National Convention, to be held in April’s hometown, Waters must also contend with a potential Achilles’ heel: persistent rumors that he has cheated on his wife with young male staffers.
At first excited about the assignment, April sometimes feels out of her depth and wonders why she was chosen instead of a veteran journalist. When a woman contacts her accusing Waters of sexual assault, April is torn: should she do her job and report this? Or should she sit on it, in case the damage to Waters’s reputation would help Newsome win the presidency?
Events soon spiral out of control, and April, feeling that her life may be in danger but mistrusting the police and the FBI, thinks of one person she can count on: the Big Man, a longtime friend from her hometown, now its mayor. Along with his stalwart crew of Little Men, they set out to unravel a gripping mystery that goes all the way to the top.

Clifford Thompson’s work has appeared in The Best American Essays 2018, as well as the Washington Post, Wall Street Journal, Threepenny Review, and Village Voice. He is the recipient of a Whiting Award for nonfiction and teaches at New York University, Sarah Lawrence College, and the Bennington Writing Seminars. His previous book, What It Is: Race, Family, and One Thinking Black Man’s Blues, was published by Other Press in 2019. He lives in Brooklyn, New York.

“Clifford Thompson’s Big Man and the Little Men is charming, disarming, and anomalous—a graphic novel grounded in the virtues of traditional fiction, rather than being a pictorial metafiction or essay. That’s to say, it’s a page-turner, with memorable characters and a genuinely clever plot, leavened with rueful wit and wisdom. It ties itself to our world without ever neglecting also to be a thrilling diversion.” —Jonathan Lethem, award-winning author of The Feral Detective and Motherless Brooklyn

“Clifford Thompson’s Big Man and the Little Men, like the author himself, is warm, unpretentious, complicated, and very, very smart. It’s also page-turningly fun to read. Thompson’s approachable drawings come alive on the page, creating people you’d like to get to know—especially as they’re nearly all people trying, somehow, to be their best selves. A political thriller with surprising twists and turns about power, America, and how childhood friendships mature into adulthood, Thompson’s book takes advantage of the graphic novel’s peculiar ability to look at its characters while looking into why politics, journalism—and, especially, life’s tangled contradictions and compromises—matter at this most dire moment for our nation.” —Chris Ware, author of Jimmy Corrigan, the Smartest Kid on Earth

“Does a wrong sometimes make a right? This is one of the provocative questions Clifford Thompson raises in this striking tale for our times, Big Man and the Little Men. You won’t soon forget the complicated and wonderfully hand-drawn characters in this story. As Thompson’s work always does, it’ll draw you in (forgive the pun) and make you think.” —Martha Southgate, author of The Fall of Rome