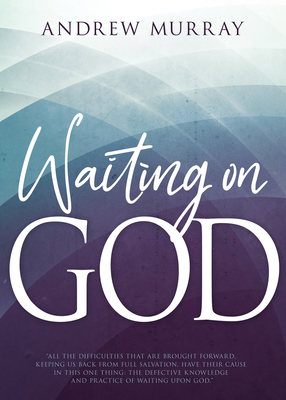 The "busyness" of life can often creep up and overwhelm us. But rather than having to depend on our own strength, it is our Christian privilege to enter into God's presence. As we do, He will supply answers to our problems and give direction for our lives. In Waiting on God, Andrew Murray shares thirty-one heartfelt meditations, one for each day of the month, to help renew our vision and quicken our desire to turn to the Lord for His quiet, peaceful strength. Discover how God's loving presence can refresh the weary heart that learns to wait on Him.

Andrew Murray (1828-1917) was an amazingly prolific Christian writer who lived and ministered as both a pastor and author in the towns and villages of South Africa. Some of Murray's earliest works were written to provide nurture, guidance, and pastoral care to Christians, whether young or old in the faith. After he authored Abide in Christ, Divine Healing, and With Christ in the School of Prayer, Murray became widely known, and his new books were awaited with great eagerness throughout the world. He wrote to give daily practical help to many of the people in his congregation, who lived in farming communities and could come into town for church services only on rare occasions. As he wrote these books of instruction, Murray adopted the practice of placing many of his more devotional books into thirty-one separate readings to correspond with the days of the month. At the age of seventy-eight, Murray resigned from the pastorate and devoted most of his time to his manuscripts. He continued to write profusely, moving from one book to the next with an intensity of purpose and a zeal that few men of God have ever equaled. He often said of himself, rather humorously, that he was like a hen about to hatch an egg; he was restless and unhappy until he got the burden of the message off his mind. During these later years, after hearing of pocket-sized paperbacks, Murray immediately began to write books to be published in that fashion. He thought it was a splendid way to have the teachings of the Christian life at your fingertips, where they could be carried around and read at any time of the day. It's been said that Murray's prolific style possesses the strength and eloquence born of a deep earnestness and a sense of the solemnity of the issues of the Christian life. Nearly every page reveals a purpose and appeal that stir readers to the depths of their souls. Murray helps us to search our consciences to shine a light on our sins and shortcomings while gaining an intimate knowledge of God's mercy and faithfulness. During his later years, he revealed the secret treasures of his heart concerning a life of persistent and believing prayer. Countless people throughout the world over have hailed Andrew Murray as their spiritual father and credited his books for much of their Christian growth.