Dear Dana: That Time I Went Crazy and Wrote All 580 of My Facebook Friends a Handwritten Letter (Paperback) 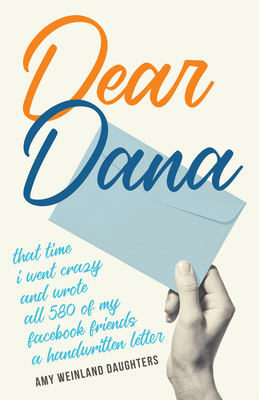 When Amy Daughters reconnected with her old pal Dana on Facebook, she had no idea how it would change her life. Though the two women hadn't had any contact in thirty years, it didn't take them long to catch up--and when Amy learned that Dana's son Parker was doing a second stint at St. Jude battling cancer, she was suddenly inspired to begin writing the pair weekly letters. When Parker died, Amy--not knowing what else to do--continued to write Dana. Eventually, Dana wrote back, and the two became pen pals, sharing things through the mail that they had never shared before. The richness of the experience left Amy wondering something: If my life could be so changed by someone I considered "just a Facebook friend," what would happen if I wrote all my Facebook friends a letter? A whopping 580 handwritten letters later Amy's life, and most of all her heart, would never, ever, be the same again. As it turned out, there were actual individuals living very real lives behind each social media profile, and she was beautifully connected to each of those extraordinary, flawed people for a specific reason. They loved her, and she loved them. And nothing--not politics, beliefs, or lifestyle--could separate them.