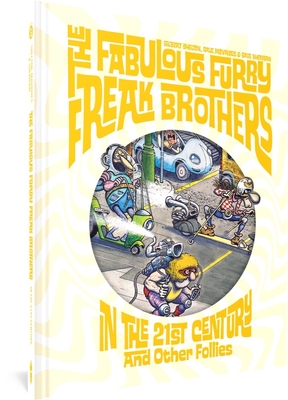 In this collection of hilarious and politically correct short comics, Freewheelin’ Franklin, Phineas, and Fat Freddy form a band; bring home a stray container of plutonium; try to make it through a whole day without getting stoned; and help Phineas through his pregnancy, in "Phineas Gets an Abortion." (About which, say no more). (Oh, did we say: "politically correct?" Just kidding!)


In the titular title story, the Freak Brothers venture outside on a mission to score a little weed. It is their first encounter with the wonders of the 21st century. ("Still illegal?") Plus: Fat Freddy’s Cat stars in two solo adventures, including a visit to "Cat Heaven." Fat Freddy himself stars in a bonanza of satirical sketches skewering such targets as Star Wars, G.I. Joe, and Superman.

Gilbert Shelton (b. 1940, Houston, Texas), a founding father of the underground comix movement, is the creator of the iconic comix characters The Fabulous Furry Freak Brothers, Fat Freddy’s Cat, and Wonder Wart-Hog. He was inducted into the Will Eisner Award Hall of Fame in 2012. He has been known to sing and play piano for the Blum Brothers, a Paris-based rhythm and blues group. He lives in Paris, France, with his wife and an ever-changing number of cats.

Paul Mavrides (b. 1952), an enigmatic cartoonist, painter, and graphic artist, began collaborating with Gilbert Shelton on The Freak Brothers in 1978. He is a founding member of the Church of the SubGenius. In 1997, after a six-year legal battle, he won a landmark decision for artists’ rights in California that established a legal equivalency between written-word authors and cartoonists.