100 Limericks for the 100 Final Days of Trump (Paperback) 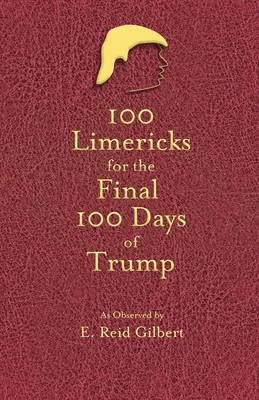 Limericks have been identified with the Irish County of Limerick, although apparently started elsewhere. One anonymous reader in NY wrote after reading Gilbert's earlier book, "I read the whole book three times and laughed and laughed. Thanks for writing it." Comic relief is aptly named. Even in the heaviness of Shakespearean tragedies there is a need for relief. Limericks seem to fit the bill for that function in the contemporary political scene.

E. Reid Gilbert grew up in the tobacco hills of North Carolina, before pursuing academic studies: Brevard College (AA English) Duke University (BA Sociology) Southern Methodist University (MTh Theology) Union Theological Seminary (STM Religious Drama) University of Wisconsin (PhD Asian Theatre) He then pursued several careers: Methodist and Unitarian Ministry College and University Teaching Mime Performer and Instructor Theatre Actor and Director After retiring from those professional pursuits he started writing: Trickster Jack (Tales of the Appalachian trickster, Jack) Shall We Gather at the River (Romance set in the mountains in the 1870s) What Matters (119 poems) Twelve Houses of My Childhood (Stories of early life) Valley Studio: More Than a Place (Stories of Mime Studies and Performances) Several theatre and Film scripts. He claims that throughout the years he's probably been following the gypsies, which his Mamma had warned him about at the age of four.