To Defund Or Disband and Rebuild The Police: How to disband and rebuild the police department to stop police brutality, racial profiling, and racial d (Paperback) 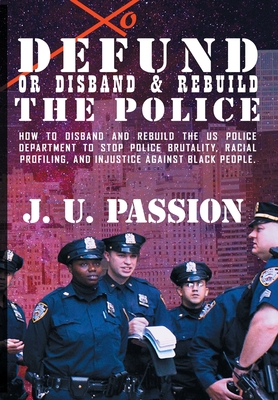 For over 400 hundred years black people have always been the survivors of brutality, victimization, persecutions, inhumanity and slavery from other races and ethnic groups globally. White people from Europe and the Americas scrambled for and stole treasures and young people from the motherland Africa to enable them survive and enrich their nations while Africa and Africans have been left to die of starvation and communal clashes incited by their white slave masters who introduced gun powder for them to kill themselves. Black people were forced into slavery in America to enrich their white slave masters. They were maltreated, burnt alive, raped, killed, beaten, and suffered from police brutality. Presently, innocent, and unarmed black boys and men and still being murdered, brutalized, and incarcerated en masse by the US Police which might lead to complete extinction of the black race in America if left unchecked. This has led to the call for the Police Department to be defunded; a public outcry led by the Black Lives Matter movement. Mr. Passion was born and bred in Africa and has experienced the side effects of the colonization of Africa and Africans by white people. He has carefully outlined solutions for the peaceful resolution of this menace and has called for the Police Department of the United States to be disbanded and rebuilt. He believes that past police reforms have been unsuccessful because most law enforcement have been compromised and weaponized for political gain. Mr. Passion writes that if the Police is defunded, America would face a new wave of widespread anarchy leading to its downfall.Mr. Passion writes that the new Police Departments would be unarmed, trained on de-escalation techniques, trained to use little or no force, trained to respect all persons irrespective of color and most of all be subject to an independent oversight body which would monitor and regulate the Police to avoid instances of brutality and police crime. He also writes that the Police department's funding should be increased, and more police officers recruited to make sure there is at least a police offer/s on every street in America. He believes if this principle is followed, there would no more police brutality and murder of innocent people including blacks on the streets of American cities. By then black people would be able to call the United States of America their home.