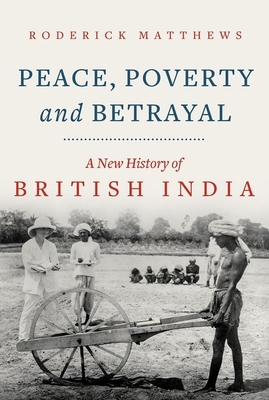 How can we explain the establishment and longevity of British rule in India without recourse to the clich's of imperial versus nationalist interpretations? In this new history, Roderick Matthews offers a more nuanced view: one of oblige and rule, the foundation of common purpose between
colonizers and powerful Indians. Peace, Poverty and Betrayal argues that this was not a uniformly systematic approach, but rather a state of being: the British were never clear or consistent in their policies, and among British and Indians alike there were both progressive and conservative attitudes to the struggle over
colonization. Matthews' narrative also takes in the East India Company, which was manifestly incompetent as a ruler by 1770, yet after 1820 arguably became the world's first liberal government. Skillfully tying these ambiguities and complexities of British rule in India to the ultimate struggle for
independence, Matthews illustrates that the very diversity of British- Indian relations was at the heart of the social changes that would lead to the Freedom Struggle of the twentieth century. Skewering the simplistic binaries that often dominate the debate, Peace, Poverty and Betrayal is a fresh and gracefully written narrative history of British India.

A freelance writer specializing in Indian history and politics, Roderick Matthews studied history at Balliol College, Oxford. His great-grandfather tutored the young Nehru through his Harrow entrance exams. One of his great- grandmothers cared for Gandhi when he fell ill in London in 1914. Hislatest book is Jinnah vs. Gandhi.
Back to top